Representatives of Albert Lea Community Theatre and the city of Albert Lea stressed the value of the Marion Ross Performing Arts Center in the community ... Read more

About 3 1/2 years after a group of residents joined together to fight for health care options in Albert Lea, leaders of the Albert Lea ... Read more 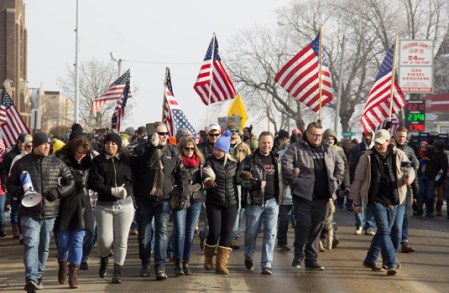 ‘We are drawing a line in the sand’

Residents speak out in protest against business restrictions At least 200 residents from both inside and outside of the area on Sunday spoke out against ... Read more

The cause of the large warehouse fire in Albert Lea near the West Main Street viaduct has been deemed undetermined, according to authorities. The Albert ... Read more

The Minnesota Department of Public Safety’s Bureau of Criminal Apprehension on Friday released the name of the trooper who discharged his firearm Sunday morning during ... Read more

The suspect in the shooting incident at Shady Oaks apartments was released from St. Marys Hospital Sunday night and booked into the Freeborn County jail, ... Read more

In the face of a new wave, Mayo urges continued mask wearing

Mayo Clinic officials are reemphasizing the importance of masking, social distancing and robust hand hygiene in the coming weeks as they anticipate another surge in ... Read more

Ten months to the day after he was shot in the head while responding to a report of a suspicious person in Waseca, Officer Arik ... Read more

Bennett coasts in District 27A

District 27A Rep. Peggy Bennett cruised to another victory Tuesday night in the race against challenger Thomas Martinez of Hayward. As of press time, Bennett, ... Read more

‘We have much to celebrate’