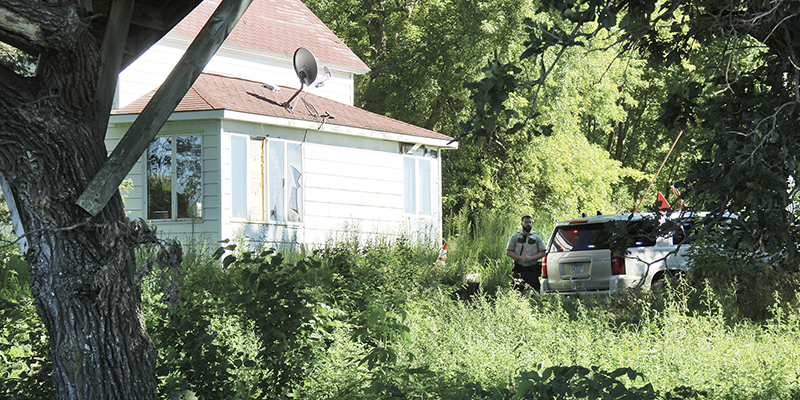 Authorities are continuing to look for a man who reportedly shot and killed another man Tuesday afternoon outside of a residence on 160th Street south of Albert Lea.

The alleged shooter has been identified as Ben Vidal Moreno, 32, who may be in a 2004 white Ford F150 with a license plate of EUZ057, said Freeborn County Sheriff Kurt Freitag. The sheriff said Moreno and the victim, whose name has not yet been released, knew each other and had previous disagreements.

The Sheriff’s Office was called to 75463 160th St., a house on a dead-end road south of Albert Lea and west of Interstate 35, at about 3:22 p.m. for a person who had been shot with a firearm. Deputies responded to the scene, along with Mayo Clinic Ambulance and Glenville first responders.

Freitag and Sheriff’s Office Detective Ryan Shea said the man was shot one time and likely died at the scene before authorities arrived. Two people who lived in the home called 911 and one was performing CPR prior to the arrival of law enforcement and paramedics.

The Sheriff’s Office stated though the investigation is still early, they believe the victim and another male arrived at the residence in an SUV, and Moreno was reportedly already at the residence.

At some time, the victim and the other male got back into the SUV and began to leave the residence. When they turned from the driveway to continue westbound on 160th Street, the SUV was struck with multiple rounds from a firearm.

The SUV reportedly stopped, and the victim got out and walked back to the house. The driver of the SUV heard one more shot and saw the victim was not returning to the vehicle, so he got back in and drove away. Law enforcement made contact with that person not long after the shooting.

“Although we aren’t certain that Moreno is armed, we are assuming that he is,” Freitag said in a release. “Because there were strong negative feelings between Moreno and the victim, which we believe led to the shooting, we don’t believe there’s a threat to the public.”

The Minnesota Bureau of Criminal Apprehension and forensics team has been called in to assist with the investigation.

Shea said after the crime scene team is done, the shooting victim will be transported for an autopsy. They said it was too soon to comment on the type of weapon used in the shooting.