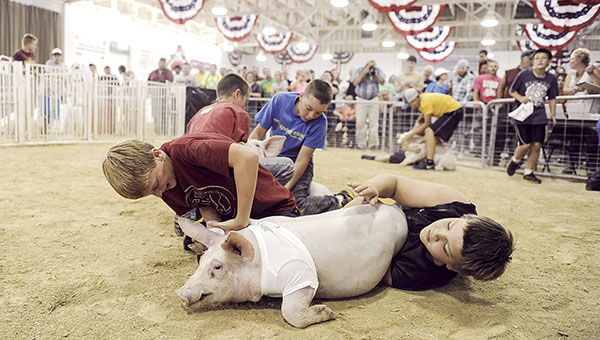 Blaine Anderson, right, holds down a pig, while Riley Schultz tries to get a shirt on it during a pig-dressing contest Friday at the Mower County Fair.

More than a dozen children lined up, clutching an extra T-shirt, waiting for the announcer’s word. Then, all at once, they dashed toward a group of pigs wandering around the opposite side of the dirt area.

About 120 people gathered in the Crane Pavilion at the Mower County Fair Friday afternoon to watch the debut of the pig-dressing contest. Lisa Stundahl and Tim Farrell, who stood waiting for the competition to start with camouflage bandannas tied around their heads and black paint smeared under their eyes, said they decided to join as a team Thursday night.

When asked if they had ever had experience handling pigs before, they smiled and shrugged.

“Not really,” Stundahl said, adding she petted a couple of pigs last year but that was it.

Despite their lack of experience, the two said they were excited to participate.

Once the event had begun, competitors dove after the pigs, struggling to hold them still as partners started to put the shirts on. Several pigs almost dragged the competitors holding them across the ground. Some pigs went into their clothing easily, while others squealed and put up a fight.

Once a team’s pig was dressed, participants worked to carry or coax it over to its holding pen. The first team to secure its pig in the pen won first place. By the end, children and pigs alike were breathing heavily and caked in dirt.

“We used to do Ag Olympics,” said Peter Marx, a Mower County Fair Board member who helped organize the pig dressing. The Ag Olympics took a year off last year, he added, but Marx said he was still looking for ways to appeal to young fairgoers.

While some of the participants grew up on farms and were well versed in handling swine, others were giving it their first shot. Either way, fairgoers took an interest in the event.

Marx, who raises pigs, said the activity was humane and didn’t harm the animals. Organizers announced a 10-minute break to let the pigs rest between when the 11-13 age bracket finished and the 16- to 19-year-olds lined up to start the next round.

Fair does it again