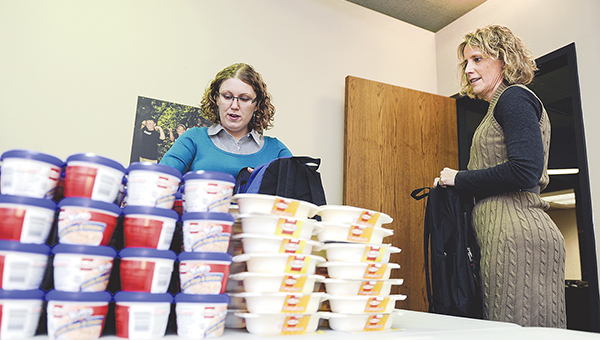 The women have a system: Grab a backpack, check the identification number and the corresponding number of children that backpack will feed, and start putting items in.

It’s a well-oiled system. Last Thursday, it took about 20 minutes for five women to pack 38 backpacks with enough food to feed about 123 children.

“As soon as we’re done, I’m leaving,” Women’s Leadership Initiative volunteer Kelsey Field said. “I’ve got to deliver these backpacks to the school right away.”

That’s part of the mission for the Women’s Leadership Initiative, a relatively new volunteer organization that’s making an impact in Austin and, soon, Mower County. 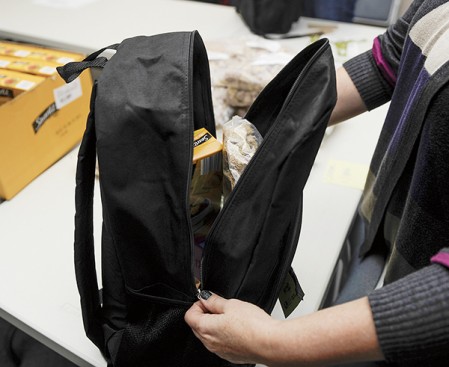 A back pack is filled with food and prepared to ship to one of the schools in town for needy kids — of the services performed by The Women’s Leadership Initiative. Eric Johnson/photodesk@austindailyherald.com

Their platform is children and education, and their calling is to take care of the basic needs of those who live in poverty, who are needy but who may slip through the cracks, the children who need a little more attention outside of the classroom so they can succeed in it.

“If kids are hungry, or have wet feet, or are cold, they probably aren’t focusing on the things they need to be focusing on in the classroom,” said Jennifer Moriarty, co-chair of the initiative.

A call to serve

Moriarty was one of a handful of women that United Way officials reached out to in 2011 to start up a women’s nonprofit group for the community.

“We had a group of women who were looking to really provide leadership for other women in the community, and they had some philanthropic goals,” Mandi Lighthizer-Schmidt, executive director of the United Way, said.

The idea behind the initiative is to gather women from around the area and get them concentrated on a way to improve the community. Lighthizer-Schmidt said similar groups have formed under the umbrella of local United Way offices around the U.S. in recent years. The United Way acts as a parent organization but the nonprofits are separate entities; the initiative is funded from membership dues and donations to the group, rather than through the United Way’s annual campaign.

That’s why, before the initiative became an official group, volunteers looked to other organizations to see what they accomplished, as well as looked to Mower County to see what issues no other charitable or nonprofit organization had addressed.

“We did quite a bit of research into issues in Austin,” said Stacy Edland, iniative co-chair. Edland, like Moriarty, was part of the initial group, and joined for similar reasons: She wanted to make a difference while empowering local women at the same time.

“I liked the idea for an opportunity for women to get together around a common cause,” Edland said.

Any platform the group took needed to be supported by many members, not just a board or a committee. That’s why volunteers surveyed about 300 women in the community to see where their interests lay. The response, according to Moriarty, was exciting: Many women identified children as a potential platform, but many also wanted to be part of a group that would actively work toward a goal.

Yet volunteers weren’t inspired to pursue children as a platform — insofar as finding a way to help children that other resources in Mower County didn’t already cover — until Sumner Elementary School Principal Sheila Berger spoke to volunteers about the number of poor children, or children in poverty, who went to Austin Public Schools. More than 55 percent of Austin students qualify for free or reduced lunches, according to the Minnesota Department of Education. That trend mirrors Austin’s growing underemployment problem, with about 5 percent of Austinites unemployed, yet about 19 percent of Austin residents living at or below the federal poverty line, according to the U.S. Census Bureau and the state Department of Employment and Economic Development. United Way officials say a family of four needs to make more than $58,000 to meet all basic needs, as well, while the average Mower County household earns about $44,000 a year, compared to the Minnesota average of about $55,000 a year, according to the U.S. Census Bureau.

Volunteers were struck by Berger’s presentation on Sumner’s personal care shelf and backpack program, where students took home backpacks full of food on the weekends to feed themselves and their siblings. That’s when volunteers decided to work toward providing all Mower County children with basic needs.

“Austin has, if you look across town, a pretty high rate of poverty in the schools,” Edland said. “What you don’t hear about is if their tummies aren’t full and they don’t have something warm on their feet, it’s pretty hard to be able to learn.”

The initiative didn’t publicly launch until May of this year, though volunteers were meeting as early as November 2012 to organize a backpack program for students at Southland Elementary School and Woodson Kindergarten Center, the only two schools in the district that didn’t have a backpack program in place. Local churches and community members covered the program at other schools. The programs are set up so staff at each school identify students in need, whose families may not be covered by programs or nonprofits and whose children are going without necessities some families may take for granted.

“We don’t know who the children are who receive these backpacks,” Chris Grev, marketing and communications director for the United Way, said. “School staff identify them for us, students who may slip through the cracks.”

From there, initiative volunteers put together personal care closets for all Austin elementary schools, where students can go to find items like shampoo, soap, toothbrushes and other things. Students in need are free to get items from the care closet whenever they’re in need, according to initiative officials.

Though the group had worked together for two years, it wasn’t until the “Power of the Palate” a large-scale fundraising event and membership drive, that the initiative introduced itself to the public. The event, which featured a silent auction and offered treats from area restaurants and wineries, was a way to recruit members and spread the word about the initiative’s cause, according to Moriarty.

The fundraiser brought in about $12,000, or enough for 3,800 meals for Austin students during this school year. Initiative volunteers held a food drive in September in partnership with Austin High School students, which brought in almost 2,800 food items and about $1,000 to support the backpack program as well.

“It’s very rewarding,” Beth Schwab, initiative volunteer, said. “I see how excited the kids are to get these backpacks. I see a direct benefit for the kids.”

More students will soon benefit from the initiative. Volunteers say the group has started a program for Pacelli Catholic Schools, and there are plans to bring backpack programs to all Mower County school districts — Brownsdale Elementary School, and Southland, Lyle, LeRoy/Ostrander and Grand Meadow Public Schools over the next few months. Of course, the group will likely bring personal care closets to all Mower County schools as well.

“It will likely end up with both programs,” Moriarty said.

The group hasn’t forgotten its mission to strengthen women leaders, however. There are about 60 members thus far in the group, with more joining every month. In addition, a speaker will come to Austin in March to discuss leadership and Edland said volunteers are discussing a potential mentorship program for women, though no plans have yet taken shape.

Regardless, the group remains dedicated to helping Mower County’s needy children, something volunteers believe will always be an issue to tackle in some form or fashion. For now, the initiative is concentrating on getting good meals and basic goods to area youth.

“As a parent, that’s the last thing you want to worry about, is your kids having enough to eat,” Moriarty said.