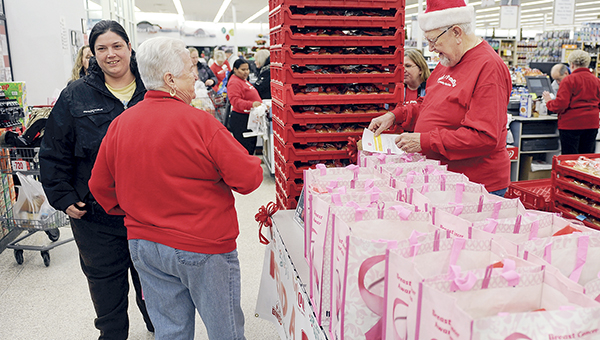 Bill and Bonnie Newell get a gift basket for a recipient during the Feed A Family Program’s dispersal Friday morning at Hy-Vee. Eric Johnson/photodesk@austindailyherald.com

One Friday each holiday season, Bob and Bonnie Newell work a full day for the price of seeing people’s faces light up when they pick up a free Christmas dinner.

“The feeling I get in my heart for doing this brings us back every year,” Bob said.

The Newells were just two of more than 60 volunteers who helped bag and distribute 630 to 700 Christmas dinners through the Feed a Family program from about 10 a.m. to 6 p.m. Friday. For the sixth year, Hy-Vee partnered with the Salvation Army, volunteers and donors like Mrs. Gerry’s Kitchen and Sara Lee to provide the meals. As a grocery story, Hy-Vee manager Todd Hepler said it’s their responsibility to feed the community, and he’s happy to know that almost everyone in Austin will have a Christmas dinner come Wednesday.

Feed a Family provides families with a bag of food worth about $44 that serves about four people. Larger families can receive a second bag of food. 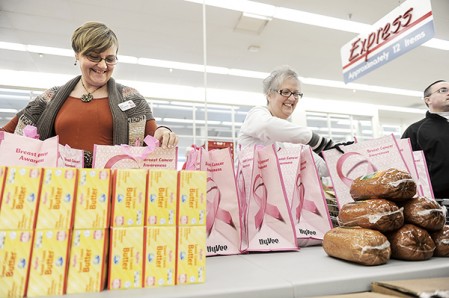 The number of meals was down this year, as the most meals Feed a Family’s ever given out is 800. But Hepler said they want the number to go down, not up, because that means there are fewer local families in need.

Feed a Family is donating beyond the Christmas meals. Because the program had an excess of donations this year, Hepler said they’ll donate about 10 pickup truck loads of food to the Salvation Army in January.

“We’ve raised more than what was necessary,” Hepler said. “The program just continues to grow. People see the need, but they also see a program that actually works.”

Hepler admitted with a proud smile that Feed a Family is a unique program for Austin’s Hy-Vee, as corporate allows store managers and officials autonomy in such programs.

“There are a lot of different programs and ideas that go across all eight states for Hy-Vee, but this is the only one that I know that’s called Feed a Family and actually touches this many people,” Hepler said.

The program is a true community effort. Hy-Vee donates time and money to the program. Mrs. Gerry’s Kitchen donates mashed potatoes and cranberry relish, and Sara Lee donates rolls. Customers also donate items, and many volunteers pitch in, too.

“I just think this is a true showing of a community that really does care about their neighbors and friends,” Hepler said.

The Salvation Army is heavily involved in the program, registering families for the program and determining which families fit the need. The meals aren’t limited to Austin, as Hepler said some are going to families in Blooming Prairie and Adams.

“It’s a collective effort by everybody,” Hepler said.

When Feed a Family kicked off six years ago, officials asked Gerry Vogt, owner and founder of Mrs. Gerry’s, to donate.

“I was happy to do it,” she said, noting her company is involved in many charity opportunities.

She’s been involved ever since, donating mashed potatoes and cranberry relish

“I can’t think of anything better than to feed a family around the Christmas holidays,” she said.

The Newells were there all day Friday, and they’ve volunteered each of Feed a Family’s six years. Both Bob and Bonnie said people’s faces light up when they receive their free dinner.

“It’s a worthwhile cause for those that have less than some of the rest of us,” Bob said.

Bob admitted helping give out the free meals hits close to his and Bonnie’s hearts, as both worked several years in food service. Bob worked as a sales representative for a wholesale food company out of Minneapolis for 27 years, and Bonnie managed the cafeteria at Hormel Foods Corp. and Quality Pork Processors for 10 years.

“This means a little more to us,” Bob said. Both are now retired.

“It’s always been a mission of the Salvation Army to feed those that are hungry,” she said.

Hy-Vee’s participation has been a big help for Salvation Army officials — and a stress-reliever — as Espe said they don’t need to order food, stack it and try to refrigerate it.

“I think it’s good for the community to see that we all kind of connect,” she said.

‘It really does work’ 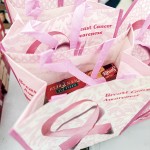 Filled baskets are ready to be picked up during the Feed A Family Program’s dispersal Friday morning at Hy-Vee. Eric Johnson/photodesk@austindailyherald.com

Feed a family is a bit of a unique effort, as Hepler noted it brings together volunteers and the people receiving the help.

“You actually get to see it first-hand,” Hepler said.

And, there’s proof it’s successful. Last week, a stranger handed a $100 donation to Hy-Vee manager Todd Hepler for the Feed a Family Program. That same man received two bags of food from Feed a Family a few years ago.

“It really does work,” Hepler said. “People are really wanting to help and help themselves.”

Espe said she and Salvation Army officials appreciate everyone who has helped over the holiday season.

“We don’t know what we’d do without them,” Espe said.

Hepler also thanked all the people who donated food or money and those who volunteered with Feed a Family.