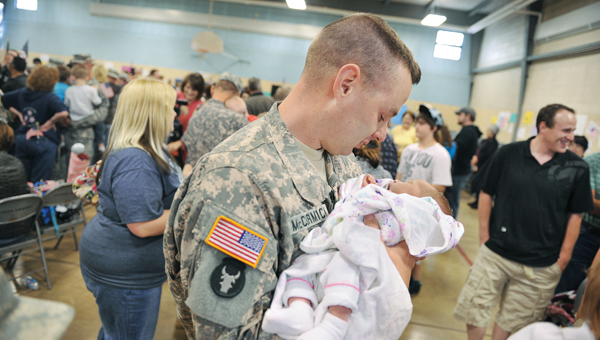 First lieutenant Dustin McCormick of St. Cloud holds his baby girl, two-week-old Piper McCormick for the first time Tuesday at the Austin National Guard Armory. McCormick was among a group of National Guard troops that returned to the armory Tuesday afternoon.

Goosebumps and tears filled the community room at the Austin Armory Tuesday afternoon as more than 30 National Guard soldiers saw their families and friends for the first time in nearly 10 months.

A crowd gathered around the rear door of the armory and broke out in cheer as it opened. National Guard soldiers from various companies and areas of the state were one of the first groups to return from their deployment in Kuwait and Iraq where they served in Operation New Dawn, which was the final draw-down of weapons and troops from Iraq.

Though the soldiers’ arrival was rescheduled to be two hours sooner than expected — shortly after 1 p.m. — many people’s anxieties grew when they heard the bus was only in Lakeville at that time.

“I think her anxiety is making my anxiety higher,” military wife Lori Kinny of Blooming Prairie said about the reaction of her 11-year-old daughter, Hannah.

Lori waited for her husband, Doug, along with all three of her daughters and mother-in-law. Though Doug has deployed to Iraq in the past, the Kinnys weren’t any more patient for his return.

Many others mentioned the same feelings, and added that the deployments never get easier. However, the welcome-home parties are always just as emotional.

“I’m going to run up to him and give him a big, big hug,” Hannah said before her father returned. An hour later when the motorcade rolled in and she saw her dad, her face was covered in tears.

Though Jon Tolman, 14, of Austin, has watched his dad, Ray, deploy three times, he said it never gets easier. Tolman waited with his brother and three sisters to see their father and uncle.

Yet plenty of patriots without any returning siblings, parents or children showed their support — like Dean and Nini Johnson of Austin. Dean remembers when no welcoming committees existed and when nobody showed up to greet soldiers who came back from southeast Asia in 1967. And Nini remembers what it was like to be without Dean for a year, as well.

“And that’s why we are here,” Dean added.

On the other end, Tuesday’s returning soldiers had the same feelings. Many of those feelings more extreme, perhaps.

That was the case for 1st Lt. Dustin McCormick from St. Cloud, who not only returned to his wife and the two children he left behind, but another baby daughter who was born just two weeks ago. McCormick has seen the pictures and watched her on Skype, but that was nothing like the real thing.

“I just couldn’t take my eyes off her,” McCormick said watery-eyed. “It just brought me to tears.”

Though soldiers and visitors were filled with joy as soon as they returned, they also couldn’t wait to leave the armory and enjoy the simple solitude with their families, especially Spc. Trevor Kolb of Austin. As of late afternoon on Tuesday, Kolb, 23, still hadn’t told his mother, Sharon Teigen, he had come home — a plan he devised with his brother. Kolb told his mother he volunteered to stay with troops and go to Afghanistan.

“Mom doesn’t know I’m here yet. … Right now, she still thinks I’m overseas,” Kolb said in a disorganized rush when he arrived at the armory on Tuesday. Kolb was still trying to figure out where he was going to buy a dozen roses to surprise his mother while she was working at the Edge Salon. Yet he pulled it off, as his mother noticed the flowers poking just into her view, then Kolb.

“It took me a minute just to recognize he was even there,” she said, and explained how she would’ve been upset if Kolb were telling the truth about traveling to Afghanistan.

While soldiers quickly dispersed to their barbecues and family gatherings, many more area soldiers have yet to return, including some from Albert Lea’s Delta Company of the 2-135. The Albert Lea armory is expected to host a welcome home ceremony of its own later this week.

The 1135th Transportation Company returned to Austin Tuesday, May 1 after a nearly 10-month deployment. read more