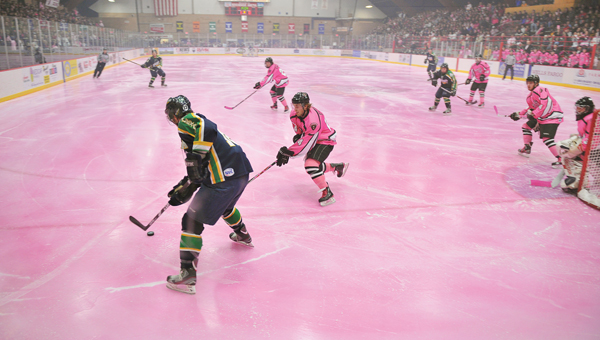 The Austin Bruins and Alexandria Blizzard skated on a sheet of bright pink Saturday night as the Bruins hosted the second year of Paint the Rink Pink at Riverside Arena. Austin won 6-3 and after the game auctioned off the pink jerseys they wore with proceeds being donated to The Hormel Institute. -- Eric Johnson/photodesk@austindailyherald.com

The Austin Bruins capped off the first Paint the Town Pink week with two big wins.

Not only did the Bruins beat the Alexandria Blizzard 6-3 in the second Paint the Rink Pink game, but they danced and auctioned their way to a $31,000 profit after the game for The Hormel Institute.

“We are ecstatic over the turnout,” said Cheryl Corey, executive director of Austin’s Convention and Visitor’s Bureau.

The first Paint the Rink Pink was a huge success, raising $22,000 in 2011 before the event turned into a community-wide affair this year.

For the Bruins, 2012 was a success again. The team set a record for attendance with about 1,989, but Bruins owner Craig Patrick said he was really excited with what came after the game.

“The attendance is great and everything, but it’s just really great that we’re able to raise a lot of money for The Hormel Institute,” he said.

After the game, Bruins players took turns dancing to part of a song as a way to woo the crowd into bidding on the team’s pink jerseys.

While a few of the players danced tentatively, most busted some moves for the crowd, as many in attendance stayed after for the auction.

Some of Bruins planned their dances: A few players carried another across the ice to “I Believe I Can Fly,” two players did the moves to the “Macarena” and there were “we’re not worthy” bows.

“That was a great number. We look forward to doing it again next year,” said Mike Delhanty, communication relations with the Bruins.

“It­ was just a great night for out fans and The Hormel Institute,” he added.

Patrick and Corey have talked about ways to expand Paint the Town Pink, and there’s plenty of potential in the future.

“It just really seems like it can grow,” Patrick said. “I don’t know exactly what’s going to happen, but it might take on the flavor of a winter carnival. We just need to take small steps in that direction.”

The sellout was the second for the Bruins, along with last year’s Paint the Rink Pink, but Patrick said he hopes the arena will sell out if the Bruins playoffs games are at home.

Total donations for Paint the Town Pink won’t be known until the end of the week. There were plenty of contributions to the cause in other ways, from pink ribbons on trees around Eastside Lake to pink ribbons on Austin Police cruisers. Corey said she wanted to thank everyone who was involved.

“We also have some fantastic ideas for growing the event next year,” she said.

Don’t judge a book by its first listen