Snow blows back to town 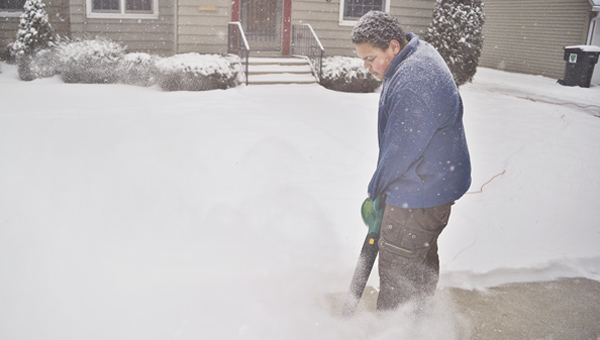 Devin Riley uses a leaf blower to blow snow from the walk in front of his home early this morning as Austin’s first real snow storm of the year passed through. -- Eric Johnson/photodesk@austindailyherald.com

Snowmobilers may be happy, but commuters won’t be pleased by the weather today.

About 3 inches of snow fell on Austin as of 9 a.m. Friday, according to the National Weather Service, with more on the way. Austin can expect between 3 to 5 inches Friday with steady snow continuing until about 4 p.m. The city of Austin had not declared a snow emergency as of press time.

“It should continue through most of the day at about the same intensity,” said Zach Taylor, NWS meteorologist.

Residents should take care as roadways will be “100 percent covered,” according to Taylor. Sheriff Terese Amazi said there have already been accidents on Interstate 90 as well. Drivers should take extra time getting to their destinations and increase their braking distance. Taylor said the wind won’t be an issue Friday, so there won’t be as many snow drifts.

Grand Meadow, Lyle, LeRoy/Ostrander and Southland schools dismissed at 1 p.m. today, and all afternoon and evening activities are canceled.

A winter weather advisory is in effect for the area until 6 p.m.

Temperatures will increase to about 15 degrees Saturday, and Sunday should have temperatures in the upper 20s to lower 30s. There’s a chance more snow will accumulate in Mower County Sunday night into Monday morning, but Taylor said next week should be a little warmer than average.

From mild to wild

Nick Doe tightens his skates before heading onto one of the outside rinks at Kaufman Park Wednesday morning where he... read more