Rare coin may be worth more than $2K 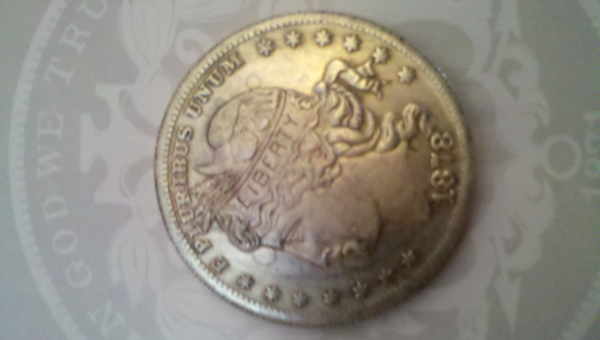 This rare goloid coin, which turned up in Austin, could be worth more than $2,000. -- Photo provided

No bullion, Austin may be home to some rare artifacts.

David Wright, field manager with Treasure Hunter’s Roadshow out of Springfield, Ill., discovered that first hand on Monday when an Austinite brought in what appeared to be an authentic, rare coin called a goloid.

“That’s one of the best parts about this job,” Wright said about rare artifacts popping up.

The coin was made in 1878 and contains mostly silver, about 3 or 4 percent gold and 9 percent copper. Goloids were proposed and patented by Dr. William Wheeler Hubbell in 1877, according to THR officials. Though only a few thousand of the coins were made, Wright said, none of them were ever released into circulation.

For those reasons, the coin that came out of an Austin man’s collection on Monday — if authentic — may be worth anywhere from $2,000 to $35,000. For privacy and the safety of his collection, the seller would not reveal his identity to the Herald. THR has already sent the coin to an authenticating company. From what Wright could determine, the coin had the correct weight and appearance, and depending on its condition, may be worth a lot.

“They don’t come on the market that often,” Wright said.

Among gold, silver and coins, THR is looking for old toys, war memorabilia jewelry and more.

THR will be at the Holiday Inn in Austin from 9 a.m. to 6 p.m. through Thursday and until 4 p.m. on Friday.