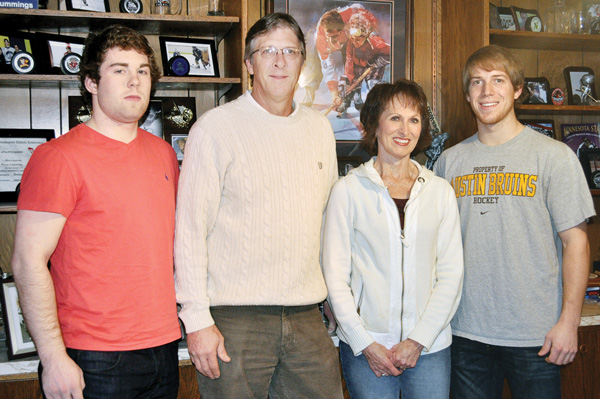 Bob and Paulette Cummings of Austin had three sons who played hockey growing up and the Cummings' have opened their home to outside the family when they hosted Austin Bruins players for the last two years. Pictured (left to right): Grant Williams, Bob Cummings, Paulette Cummings, and Chase McDonald. Bob passed away on Jan. 7 from Natural causes. - Herald file photo

He was a level-headed man. People often remember that first when they think about Bob Cummings.

Patience, kindness, empathy and knowledge were just a few more of his traits, according to many. But that demeanor was his gift to others.

To Bryan, Bob’s ability to reason and help people to help themselves was noticeable. Bob did that for more than his three sons, Bryan, Brent and Brad; he was like a dad to many. Plenty of youngsters grew up in the Cummings’ residence, and they were always welcome.

“Night after night, weekends, we’d come home and there would be a whole bunch of kids sleeping on the couch, on the floor,” said Bob’s wife, Paulette. “It meant the world to Bob to have that connection.”

And those youngsters looked up to Bob. Friends of Bob’s sons spent many hours at the Cummings’ house, even when the sons weren’t home. Whether kids wanted to play games or seek advice, they could get both at the Cummings.’

“When the doorbell rang, nobody would get up,” Bryan said. “It didn’t matter who — ‘just come in’ — that was Bob’s policy.”

Even after Bryan, Brad and Brent finished high school hockey and moved out of Austin, the open-door policy remained. The home has been a place for Austin Bruins players during the last two years. It was sort of Bob’s way to give back to others, Bryan said.

Chase McDonald is experiencing that first-hand. McDonald came from Salt Lake City, Utah, to play for the Austin Bruins. The Cummings are housing him and another Bruin, Matt Hanson. Though they’re not immediate family, McDonald and Hanson helped hold the framework at the Cummings’ house amidst Bob’s death.

“It’s been a godsend to tell you the truth,” Paulette said about having the two young men in the house. “They’ve been absolutely remarkable. They’ve been like part of our family through the whole thing.”

Bob’s death is difficult for McDonald, too.

“It’s tough for me,” McDonald said. “He was definitely a role model, definitely someone who helped me out and influenced me a lot.”

In the year that McDonald has known the Cummings, he has experienced how helpful Bob was to others.

“It was anything and everything that I needed help with, whether I asked or not,” McDonald said. “Really, a lot of the time, before I even asked for help, he would be offering. … He was really just a stand-up guy.”

Yet many may not have realized how influential Bob was until reminiscing, like many were on Thursday. Paulette and Bryan were surprised to hear the countless stories about Bob and the respect people held for him.

“We knew Bob was a good guy, and we knew friends and family appreciated him,” Paulette said. “But the community outpouring that we’ve seen has been absolutely outstanding. To know how other people felt has just been so heartwarming, and it has lifted us through this worst part.”

Though Bob wasn’t an expert on certain things — like he never played hockey — he had a unique ability to connect with people and teach them. Bryan mentioned Bob was able to help anyone who sought his advice and was humble about it, never bragged.

“If he gave you the tools to get something done, and you got the task done, he was proud of you. And that’s all he needed and never wanted anything more.”