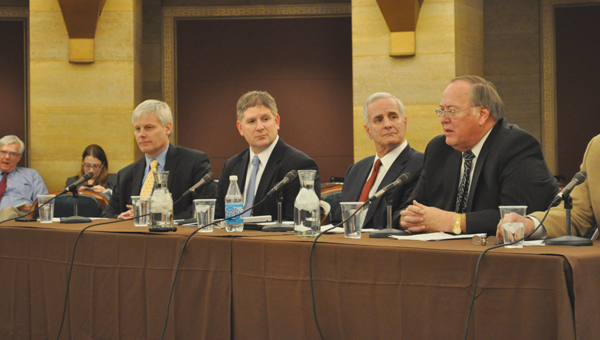 ST. PAUL — State legislative leaders said Thursday that getting Minnesotans back to work is their No. 1 priority for the 2012 legislative session.

House Speaker Kurt Zellers, R-Maple Grove, said he is unwilling to put an exact figure on the number of jobs lawmakers are hoping to create with a bonding bill, but Democratic leaders and the governor agreed the Legislature needs to focus on projects that will put people to work.

“These are investments in our future,” DFL Gov. Mark Dayton said at Thursday’s legislative preview. “These are seriously needed to provide future economic growth.”

Zellers would not estimate a dollar amount for the House bonding bill, but Senate Majority Leader Dave Senjem, R-Rochester, said he expects the Senate version to include up to $418 million in public infrastructure projects.

Senjem did not identify any specific projects that might be approved, but he has previously expressed support for The Hormel Institute expansion, which would be funded partially by money from a bonding bill, if approved.

Senate Minority Leader Tom Bakk, DFL-Cook, said he hopes to push the Senate bonding bill through early in session so construction projects can begin immediately, while the construction climate is still good.

“The construction industry is not in a recession,” Bakk said.

Zellers and Bakk agreed the session should be quick and to the point. Many lawmakers will be eager to return to their home districts once redistricting maps are released, and Bakk said it’s important to have a succinct session after last year’s drawn-out ending, which concluded after a 20-day government shutdown.

House Minority Leader Paul Thissen, DFL-Minneapolis, said the key to a quick session is to avoid distractions, particularly in the form of constitutional amendments.

There is talk that Republicans will try to pass a constitutional amendment to require the Legislature to have a 60 percent supermajority to approve tax increases.

Rep. Jeanne Poppe, DFL-Austin, also mentioned chatter of a “right to work” amendment making membership in labor unions voluntary. Although neither of these potential measures were discussed in detail at Thursday’s legislative preview, Dayton said constitutional amendments shouldn’t be necessary, because he’s willing to negotiate all topics. He admitted he may use his veto powers on legislation and said the executive branch should maintain involvement — something a constitutional amendment doesn’t need.

“I’m open to negotiating anything on anything,” Dayton said. “The design of our government is to have the legislative branch work in cooperation with the executive branch.”

Zellers said he prefers not to use amendments to pass legislation. Last year, he voted in favor of putting the gay marriage amendment on the ballot, but he voted against another proposed amendment.

“I think it’s an individual basis,” he said.

Another possible distraction as session begins could be the Vikings stadium debate. Senate and House leadership agreed that a bill needs to be proposed so committees can begin working on the measure.

“I think the Vikings deserve a vote on this issue,” Bakk said.

Senjem said the issue is unavoidable.

“You stand in front of this thing, and it’s kind of like a freight train, and it’s coming through,” Senjem said of the stadium debate. “I’m not sure it’s a priority, but I’m not sure we can run away from it either.”

Senjem and Bakk agreed the bonding bill is higher on the priority list than the stadium, but they’re hoping to accomplish everything on the legislative to-do list more efficiently than in 2011.

The 37th annual Christmas bird count in Austin had some bigger highlights than usual this year. Austin birdwatchers not only... read more