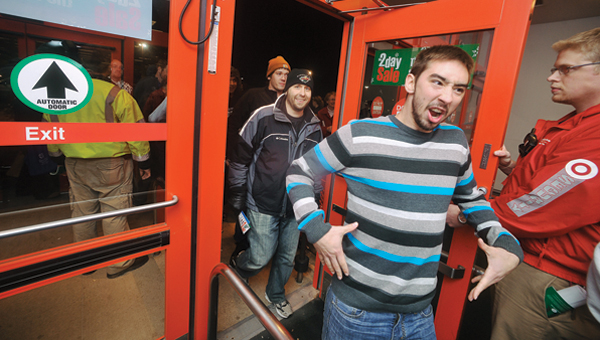 Matt Huber, of Bloomington, down visiting local family, celebrates being let in to Target shortly after midnight as throngs of people showed up to take part in Black Friday. Austin Target employees were pleased with how the annual shopping event went Friday.

Black Friday appeared to be a success for area realtors.

Brenda Brandt, executive team leader for the sales floor at the Austin Target, said this year was comparable to if not better than past years.

“The day has gone very, very well for us, and we are continuing to be very busy,” she said Friday.

A record number of shoppers are expected this weekend to take advantage of discounts of up to 70 percent. For three days starting on Black Friday, 152 million people are expected to shop, either online or in stores, an increase of about 10 percent from last year, according to the National Retail Federation.

The early opening didn’t cause any hitches in Austin, and Brandt said everything went smoothly at Target.

Some shoppers started lining up at 7 p.m. Thursday for the store’s midnight opening.

By the time the doors opened, the line wrapped from the front door north toward County Highway 27 and west along the curb of the highway.

“Our guests are telling us it’s the perfect time to shop,” Eagen said late Thursday. “The turnout we have right now is definitely more than we anticipated.”

A few incidents were reported nationally. In Los Angelas, about 20 people at a local Walmart store suffered minor injuries when a woman used pepper spray to gain a “competitive” shopping advantage shortly after the store opened.

Locally, Black Friday was mostly quiet. Eagan and her staff did the best they could to keep the Black Friday buzz contained.

Staff kept the doors closely guarded, only allowing about 30 customers in the store at a time to avoid trampling.

When the first customers sprinted inside, Target staff shouted for them to slow down.

Televisions and toys were the hot items, according to Brandt. Some TV were on sale for less than $300.