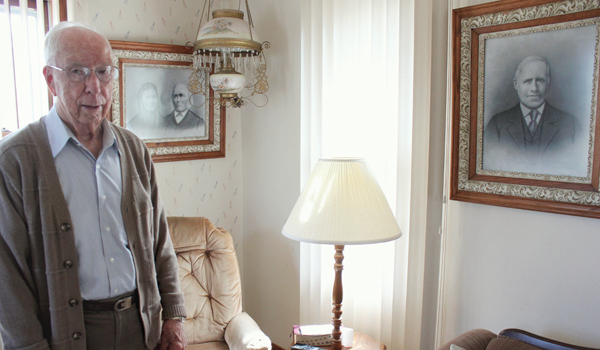 Leonard Haugland, 95, was among 80 people who attended the sesquicentennial celebration of Luther College in Decorah, Iowa, which featured King Harald V and Queen Sonja of Norway. - Matt Peterson/matt.peterson@austindailyherald.com

When the King and Queen of Norway come around, not just anyone gets to see them. However, a full-blooded Norwegian would be a likely candidate.

Leonard Haugland of Austin fits that bill. Haugland received a special invite to the king and queen’s visit in Decorah, Iowa, last week: A Tribute to Their Majesties King Harald V and Queen Sonja of Norway, A Celebration of the Luther College Sesquicentennial.

“It kind of surprised me that I was invited,” said Haugland, a 95-year-old Norwegian who grew up on a farm near Lyle.

Haugland — who is as Norwegian as they come in Minnesota — only added to his list of Scandinavian experiences on Oct. 13, when he attended the royal event at Luther College. He was one of just 80 people who received special invitations from the college’s president, as Luther has Norwegian roots, and one of Haugland’s sons served on the school’s board of directors.

Haugland, who has visited Norway three times, never saw the king and queen in person before. He said the event was very formal, and the staff handled arrangements very professionally. He was surprised that the program guide had so many rules of etiquette, such as women not wearing all black or all white, men being required to wear black suits, nobody being allowed to touch the food, talk or take photographs during the event. They even had requirements for the King and Queen’s entrance and exit.

Perhaps one of the few Norwegian things Haugland will never get to do is personally talk with the king and queen. Though guests couldn’t speak directly to the royalty, Haugland could have done so if allowed — in Norwegian tongue.

“Oh yeah, I can speak that pretty fluently if I have to,” he said.

Though Haugland was born in the U.S. — and his mother was, too — he still takes part in countless Norwegian traditions. Haugland’s father was born in Norway, and a stroll around Haugland’s living room showcases the 100-plus years old pictures of grandparents and great-grandparents, encased in original wooden framing. But one wouldn’t know Haugland is fully Norwegian just by looking at him or talking to him.

“I’m just a local boy,” Haugland said of himself.

However, people would likely catch on if they spent enough time around Haugland, saw him eating traditional Norwegian foods or attending a Sons of Norway meeting, of which he is an original member of the local chapter.

Like a true Norwegian, Haugland has a taste for raw fish. He’s not crazy about lutefisk, but he has eaten his fair share of kippered snacks. His dad used to order boxes of frozen herring from Duluth — 25 pounds at a time — which Haugland said were “really good.”

After getting married and moving to Austin, Haugland spent several years running businesses elsewhere. Ultimately, he has spent most of his life within the immediate area. Haugland recalls many of the Norwegian things he has done throughout his life, like making lefse with others, volunteering at Scandinavian church dinners and serving with plenty of other Scandinavians in local service organizations. Today, he doesn’t take part in as many things as he used to. He’s okay with that, though.