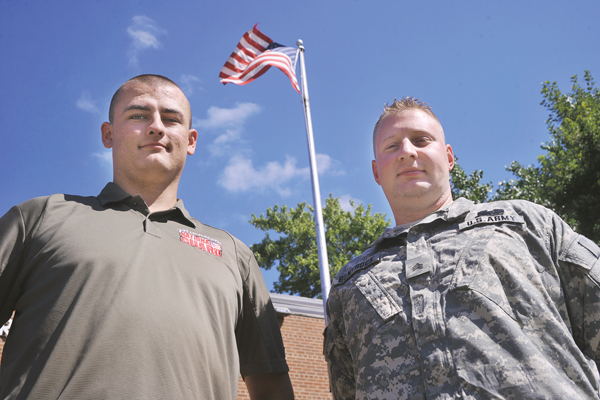 Trevor Kolb and Eric Buntrock are two local Guardsman who are heading overseas shortly for one year as part of Operation New Dawn. - Eric Johnson/photodesk@austindailyherald.com

Though Spc. Trevor Kolb of Austin has been enlisted in the Minnesota National Guard for two years, he’s going to find out a lot more this fall.

Kolb, along with the second largest deployment of the Minnesota National Guard since World War II, is going to Kuwait for one year. Kolb and roughly 60 members of the 1135th Combat Support Group out of Austin are part of Operation New Dawn, the final draw down of weapons, equipment and troops from Operation Iraqi Freedom.

Kolb understands the pressures, hears the advice from others and even has an idea of what he’s going to experience as soon as the hot rush of Kuwait’s air hits his face. He just hasn’t seen it for himself.

“You get the stories,” he said. “For the most part, it’s just something I’m going to have to experience myself.”

But Kolb and all his comrades who haven’t experienced active duty have another obstacle to tackle: leaving their families and friends for an entire year. That’s where others with experience play a vital role.

Austin resident Sgt. Eric Buntrock experienced his first active duty from 2004 to 2006 when he deployed to Iraq. He sees how the anxiety affects first-time deployments and the people around them.

“You can see how reality is just setting in, not only just for them, but especially for their families,” he said.

Buntrock experienced those hardships first-hand in 2004 when he left behind his two daughters. Now, his daughters, 8 and 9, are old enough to realize what is happening. But even though they’re worried about their dad, their entire family has something others don’t: experience dealing with deployed loved ones. Buntrock’s brother has also seen active duty. Buntrock and his family — through the help of local support programs and caring friends — have a better understanding of how to handle the distance.

“I think the Army has done a great job as far as training — training for families,” Buntrock said.

He added, “Most of the family — between me and (my brother) deploying twice — has a pretty good understanding of what needs to happen.”

Like Kolb, Buntrock couldn’t predict what his first experience was going to be like. Looking back, however, Buntrock sees how the second time may not be as difficult.

“There were a lot of uncertainties, a lot of unknowns,” Buntrock said about his first deployment. “And with this one, it’s just the exact opposite.”

Though it’s still Kolb’s first deployment, he’s not stressing about the uncertainties. He spoke of the military as another family to which he can rely on.

“I can count on any one of them for anything,” he said.

Furthermore, Kolb looks at deployment from several positive angles. One reason he is deploying is to be a role model for his brother. Nobody pressured Kolb into his situation, he said. He wanted to take charge of his life.

“It was more just time to step up to the plate,” Kolb said, and added he’s personally gained something from the Guard, as well. “It’s just something I feel I need to do — and want to do.”

Though Kolb and Buntrock have differing experiences, the one thing they, their peers and superiors talk about with similarity is the heat. Kolb said he knows it’s going to be hot, even hotter than where he trained in South Carolina. However, the opportunity itself offers him other benefits.

At 10 a.m. Thursday, Aug. 18, the Austin Armory will host a sendoff ceremony for the local unit, along with other soldiers from Mankato. From there, the unit will complete more training in Mississippi, and eventually arrive in Kuwait sometime this fall. After seeing the beginning of the war in Iraq, Buntrock will now get to see the end.

“It’s almost like a sense of relief,” he said.

Being part of that ending is something to which many proud soldiers are looking forward.