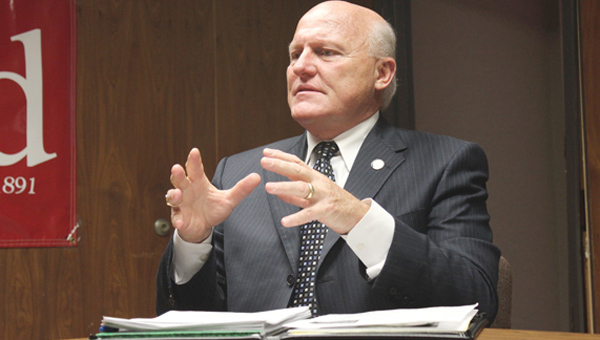 The ball is in Gov. Mark Dayton’s court.

That’s what Sen. Mike Parry, R-Owatonna, says when it comes to a potential government shutdown.

“The Legislature has produced a fiscally responsible, balanced budget with a six percent increase (in spending),” Parry said Monday afternoon. “If the governor wants to hold the state employees hostage for a tax increase … the shutdown falls on his shoulders and no one else’s.”

Parry passed through Austin as part of a tour to talk to citizens about the state budget and what must be done to resolve the deficit. He said the Republican majority has attempted to meet Dayton in the middle with a budget outline, but Dayton won’t budge.

“We have compromised,” Parry said. “We compromised the budget and waited for the governor to give some input, which he didn’t.”

“We increased state spending by six percent,” he said. “With that (tax money) we’re trying to spend it with the best innovation and with great reform.”

Parry said the conservative majority was not willing to compromise to the point of raising taxes for the top two percent of earners in the state, particularly because that tax strategy has backfired in other states.

“What the governor wants is a 2 percent increase on the highest wage earners,” Parry said. “Maryland raised taxes on the upper income earners in 2008, and they had a 30 percent decrease in their tax returns in that bracket.

“The wealthiest can move their money wherever they want to.”

Until Dayton is willing to compromise on his tax stance, Parry said there’s not much else the Legislature can do.

“He will be the one that shuts down state government,” he said. “We’ve come to the 50-yard line with our budget.”