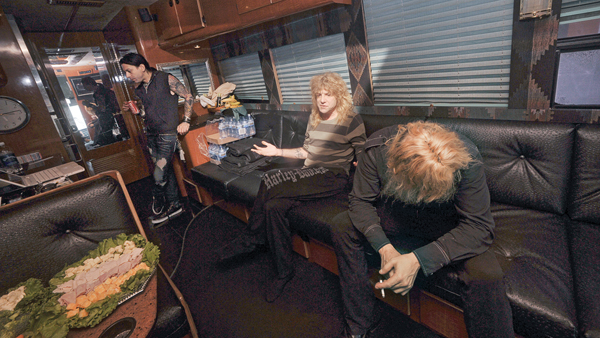 Drummer Steven Adler, of Adler's Appetite and former drummer of Guns N' Roses talks about hitting the road and his career in music to date aboard their tour bus Thursday afternoon outside Torge's. -- Eric Johnson/photodesk@austindailyherald.com

Ask any legends of the 80s, and they’ll tell you — something in the music industry has died.

Anybody with a computer, a microphone and a voice can make a sound and sell it. Tens of thousands of albums used to be released every year, now it’s hundreds of thousands.

But for Steven Adler and Chip Z’Nuff, many aspects of music are still alive: metal, guitars, drums, hair, tattoos and more than anything, the road. For these musicians, who have come full circle, it’s all about getting back to their roots.

“We’re doing it the old-fashioned way,” Chip said. “It’s good to get back to the old fashioned values.” 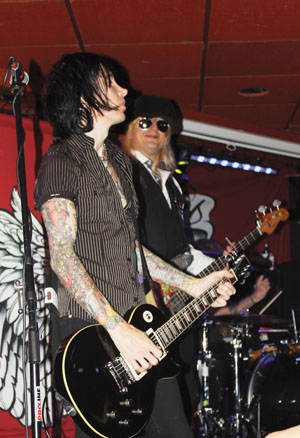 Adler, original drummer for Guns N’ Roses, and Chip, from Enuff Z’nuff, and their band, Adler’s Appetite, recently started their Good to Be Alive Tour, which rolled through Austin Thursday night. Twenty-five years have changed a lot of things for Adler and Chip Z’Nuff, but not their authenticity.

They’re not plugging hours in the studio, remastering old songs or selling expensive tickets to arenas; they’re performing the way shows used to be done, five, six and sometimes seven nights a week at live venues. They’re back in small towns, playing clubs and casinos, and that’s OK to them. Thursday, they hit Torge’s Live Sports Pub and Grill. Even though weeknight shows don’t always draw big crowds, the band never idles down when on stage.

“Hitting these small towns is part of our scheme,” Chip said about getting some notoriety for the recently reformed band.

For now, the band’s niche is playing Guns N’ Roses cover songs, with several of their own new singles, which have a similar metal flare.

Although the band just returned from Europe and began touring in May, its current members have only been together for about six weeks. That doesn’t bother Adler.

“It’s fresh,” Adler said. “And from day one, Lonny Paul and Patrick Stone, they already brought so much to the band.”

He added, “The best way to get tight as a band is doing one-night stands in a rock-and-roll band.”

Adler’s Appetite, which started several years ago, has seen some different members. But the opportunity to work with Chip Z’Nuff was very appealing to Adler, who previously said he has always liked Chip’s music.

And the arrangement was appealing to Chip, as well, as he described one of their phone conversations: “I asked (Adler) who his favorite band was beside Guns N’ Roses — he said ‘Queen’ — I said, ‘I’m in.’”

Though the members have been through many rough times, Thursday night, they were upbeat. Although they quietly walked on stage and broke into their first song without notice, lead singer, Patrick Stone was mingling with the fans soon afterwards, even singing from the top of a table. Lonny Paul and Michael Thomas played guitars; Chip contently played bass, and Adler hammered at the drums with a smile on his face the entire night.

According to Torge’s manager, Jeremie Slagle, landing the show was somewhat lucky, as the members were passing through the area and it fit in their schedule. The band just came from a show in Crystal Lake, Ill., and heads to Minneapolis for Friday’s show. The crew has played in a different city eight of the last nine days and looks to stay booked through the rest of the year. Tour dates are listed through August, but the band said its playing through the end of the year.

But like any band, Adler’s Appetite’s members don’t want to live the rest of their lives on the road.

Chip and Adler said there is a new album in the future, of which they plan to record after the tour is complete.

The band has hopes all the touring will get people excited about an album. After they produce an album, and possibly re-record a Guns N’ Roses album, they hope to start playing some bigger venues.

“Now it’s time to take that next step,” Chip said.