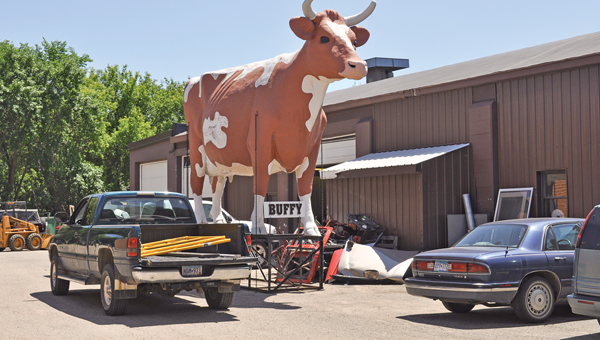 After 42 years, Buffy the Cow stepped down from her perch in Austin. -- Trey Mewes/trey.mewes@austindailyherald.com

It came as an udder surprise to everyone.

Buffy the Cow, Austin’s most famous cud-chewer, is now retired.

The famous landmark was removed from the roof of Mike Ankeny’s office building at 1111 Fifth Place SE Wednesday afternoon after 42 years of watching the town.

“I always said if I ever sell (the building), I would have to take her down,” Ankeny said.

Ankeny finally decided to sell the building to Chad Carlson of Austin Electric, who has rented the building for several years, last week. 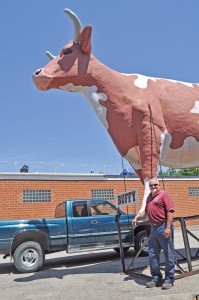 Mike Ankeny will sell the current Ankeny's office to Austin Electric in September. He intends to put Buffy at the Mower County Fairgrounds. -- Trey Mewes/trey.mewes@austindailyherald.com

Ankeny had been toying with the idea for a while, however. It took workers about 20 minutes and a crane to take Buffy off the roof. She was uninjured and on a trailer next to the office as of Wednesday afternoon.

Buffy’s removal came as a surprise to many. Workers say they were only notified about her retirement Tuesday. Cars slowed down and wondered what happened to Buffy Wednesday afternoon, with several people pointing toward the roof.

Ankeny hopes to put Buffy to pasture at the Mower County Fairgrounds and has spoken with fair board members about it previously. He said he spoke to John Mueller, fair board president, on Tuesday but hadn’t heard a response from Mueller. Mueller was not immediately available for comment.

Buffy is a fiercely beloved attraction to the town. People still remember when she was shot with several arrows back in the ‘80s as an homage to the “Dallas” TV show angle of who shot J.R. Ewing.

“I remember that vividly when I was a kid,” said Mary Burroughs, Austin Public Schools director of human resources.

No Buffy history would be complete without mentioning the mystery behind her missing horn more than 10 years ago. When a bad wind storm knocked the heifer off the roof and caved in the office building, Buffy was largely unharmed except for a missing horn. Ankeny remembers getting a ransom note from someone claiming they had the horn. He’d heard the note came from friends who wanted to milk Ankeny for a donation to charity, but it turns out no one he knew had the horn.

Ankeny also heard a local girls softball team had the horn, but nothing was ever proven. After receiving a Polaroid of the horn, police eventually returned the horn to Ankeny. Ankeny was told the horn was returned to police, but he wasn’t sure by who. He said he was never mad or upset about the horn, but he was curious about what had happened to it. Ankeny said he asked then-detective Tom Stiehm, now Austin’s mayor, about the case but didn’t get any details. According to Ankeny, Stiehm told him the case was “an intense bovine investigation.”

Ankeny will move offices to property next to his Ankeny’s gas station on the east side of town. Buffy’s removal isn’t the first business Ankeny’s sold this year, however. Ankeny sold the Budget Oil gas station on Fourth Street NW and Oakland Avenue to the city of Austin in March and closed it down earlier this month. It was the first store Ankeny owned after he graduated from high school in 1976.

The office building on Fifth Place SE was first used by Ankeny’s father when he opened up shop in 1946.