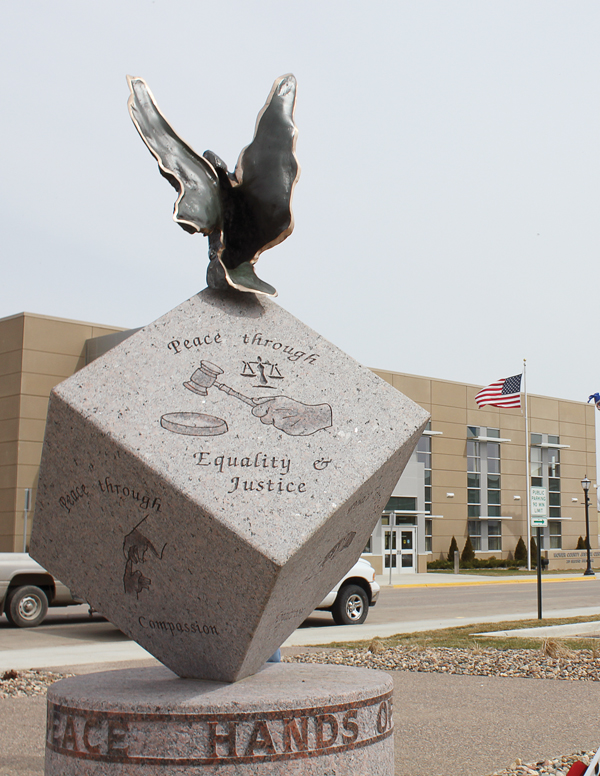 The Zonta club's "Peace Statue" was moved from beside Mill Pond to the park beside the jail and justice center due to flood mitigation efforts. Members thought the park would be a good new home because of the words "Peace through equality & justice" on the one side of the statue. - Jason Schoonover/jason.schoonover@austindailyherald.com

Plaza on First, the park across from the Mower County Jail and Justice Center, has a new symbol of peace.

A statue originally installed by the Austin Area Zonta Club beside Mill Pond was moved to the plaza because of ongoing flood mitigation efforts.

The small space beside the justice center was chosed as the new home for the “Peace Statue” because of an engraving on one side that says “Peace through equality & justice,” acording to Anderson Memorial owner Jeff Anderson.

The statue was originally dedicated to the city of Austin June 14, 2005. Anderson designed and built the statue.

Dove: Universal symbol of peace. Oftentimes symbolic of the Holy Spirit and depicted as descending upon us as we receive his comfort. The dove, however, is ascending as if taking to flight representing our need to give and/or spread peace rather than to receive it. It is identifiable, yet abstract. Coarse texture on the outside, smooth on the inside and polished on the edges: Sometimes we need to be aggressive, as in war, to preserve Peace even though we wish it could be all smooth and polished. The interior of the dove is hollow and open: Sometimes we need to go deep inside ourself to find or deliver peace.