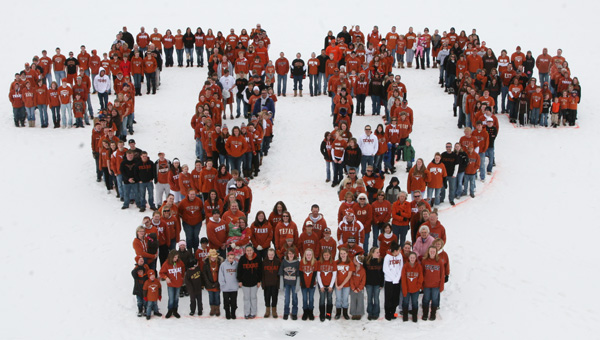 Friends, family and community members who knew Ressler stood together on the high school football field in Blooming Prairie, forming the shape of the Texas Longhorns “UT” logo in memory of Ressler and to thank the Longhorns for their support after Ressler’s death.

According to classmates and teachers, Ressler was always prepared to debate his belief that the Texas Longhorns are the best athletic team in the world. In the days after his death, the halls of Blooming Prairie High School were flooded with orange when both teachers and students began buying Longhorns gear to wear in memory of Ressler and as support for his family.

After his death, the Longhorns sent the Resslers signed photos, a signed basketball and letters of support. The photo that was taken Sunday will be sent to the team with a thank you note from the family and community.

Not only will Ressler live on in community members’ hearts, but he will also be remembered through the JR Foundation that was established as a memorial scholarship fund for Blooming Prairie seniors. The JR Foundation will be hosting a golf tournament this summer, one day before the first scholarship recipients are to be announced.

The scholarship foundation and Longhorns thank you note are fitting, since everyone who came in contact with Ressler seems to have been impacted by his happy, accepting demeanor.

“Jordan always had a smile,” Mary Worke, Blooming Prairie school counselor said previously. “He could always make everybody feel like they were special. He loved and talked to everybody; it didn’t matter who you were.”

“There wasn’t a person he passed in the hall without making them smile,” John Bruns, Ressler’s basketball coach agreed in November. “You would never see him mad, never see him complaining.”

Marc Feuerhak of Midtown Auto towes a stranded car out of flood waters on North Main Street as a truck... read more