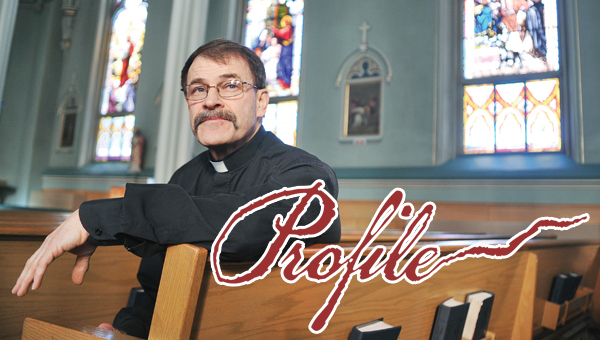 Father Joe Fogal describes himself as an extrovert when it comes to bringing Christ to those he serves. -- Eric Johnson/photodesk@austindailyherald.com

A priest at St. Augustine’s and St. Edward’s churches in Austin, Fogal is known around the community as Austin’s priest. And while that’s a title he’s proud to claim, he hopes he’s more to people than just someone who wears the collar.

His passion is to present the love of Jesus through his life.

“I am a presence of Jesus to people,” Fogal said. “I’m here to love people and help them to know God.”

Fogal was ordained a priest in 1975. From there, he worked throughout the state in college ministry, high schools and churches. While he thoroughly enjoyed the energy of the high school and college settings, he said he’s grateful to now play meaningful roles in the lives of his parishioners.

“You feel like you connect with people in ways that others can’t,” he said.

The way Fogal explains it, priests are there for it all — good times and bad. And for him, there’s something truly rewarding about that.

“You share in people’s happiest moments and saddest moments,” he said.

He’s there for births, baptisms, weddings and joyful celebrations. He’s also called on for funerals, prayer in tough times and comfort to those who need it the most.

Fogal’s high energy and positive attitude make him a person most everyone wants to be around. For that reason, his schedule stays pretty busy. On any given day, he works from the early mornings into the evenings. But that’s all right for Fogal, who looks at his job more as a lifestyle than anything else.

While rather busy, Fogal still takes time to enjoy the outdoors. Even when he’s enjoying the scenery with others from a mountainside or along a river or body of water, he said he feels most fortunate and blessed to be someone people can trust.