Al Batt: No time for being offended

I’ve looked everywhere for my flashlight and I can’t find it.

Doesn’t that make you angry?

I have a wonderful neighbor named Bruce. Whenever I pass his drive, thoughts occur to me. Thanksgiving was a keeper. We had just enough food. A sister-in-law introduced me to the art of putting honey on pumpkin pie. It afforded me great pleasure. My father ate cheese on apple pie. I’ve found that a most agreeable combination.

Living large in a little town

We’re all from somewhere—here, over there, back there, down there, up there, under there or almost there. The fellow was looking for a cemetery named “If You Were Dead You’d Be Home Now.” I think that was the name. I’d never heard of it. He referred to one of my favorite small towns as a backwater burg. I wasn’t offended. There is no reason to be offended by everything. There are plenty of other people willing to handle that task for me and would be offended if they weren’t offended. I told him a passive-aggressive dog had been reported to the police. I thought that might convince him there were big city problems in small cities. He was unimpressed.

There are things I remember from my boyhood a few miles outside a village lacking a metropolitan area. I thought a place with stoplights was a big city. When I saw someone wearing hand-me-down clothing, I knew who it was handed down from.

I learned enough to get by at the barbershop. Most of the businesses in town had built-in museums. I was at a rural cemetery for an interment, but not the cemetery the man was seeking. The casket was about to go into the ground when the deceased’s brother noticed it was the wrong burial site and halted the process. When asked why he’d dug the wrong grave, the gravedigger said succinctly, “The ground was softer there.”

If you want someone to believe what you’re saying, attribute it to a famous person. Both Mark Twain and Abe Lincoln told me that. This isn’t part of a bad joke, but I read the following in several places recently, “Mark Twain once said that if the first thing you do each morning is to eat a live frog, you can go through the day with the satisfaction of knowing that that is probably the worst thing that is going to happen to you all day long.” That’s motivational and funny, and I enjoy Twain’s writing, but there is no substantive record of Twain saying or writing this. Credit should go to Nicolas Chamfort (1741-1794) who said something close to that. Here is a streamlined version of his, “Swallow a toad in the morning if you want to encounter nothing more disgusting the rest of the day.”

My neighbor Crandall bought a chicken to make sandwiches. It doesn’t. All it does is poop on the floor. I crossed a chicken with a parrot so it can tell me why it crossed the road.

What word is an anagram of itself? Stifle.

Isn’t hyperbole the best thing ever?

There was a soft wind as I looked out a window and paid attention. Birds are a way to experience joy and wonder. They are adorable and outdoorable. I watched a brown creeper fly from the base of one tree to the next, foraging upward each time. A nuthatch moves up, down and sideways on a tree. A fox with a plush nose warmer (tail) ran past. Ironwood and red oak demonstrated marcescence, meaning having withered, persistent leaves. Ironwood makes great tool handles and posts.

There were four chickadees on one platform feeder on Thanksgiving. There are few things more cheering than a chickadee, but I seldom see four of the hyper-vigilant birds on a single feeder. Starlings and house sparrows were present in good numbers. Some people consider them the lima beans of birds. Dark-eyed juncos were here and there. They’re called snowbirds. John James Audubon wrote, “So gentle and tame does it become on the least approach of hard weather, that it forms, as it were, a companion to every child. Indeed, there is not an individual in the Union who does not know the little Snow-bird, which, in America, is cherished as the Robin is in Europe.” A vinaceous (of the color of red wine) purple finch male joined the day and an opinionated blue jay piped up.

“What do we live for, if it is not to make life less difficult to each other?”—George Eliot. Be kind. 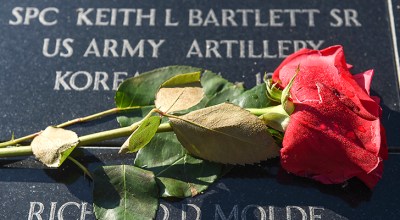 Our Opinion: Take the time to remember the fallen

Tim Penny: Keeping your farmland in production after retirement and beyond

Peggy Keener: May, a month of dipsy days

Carolyn Bogott: A breath of fresh air for Austin