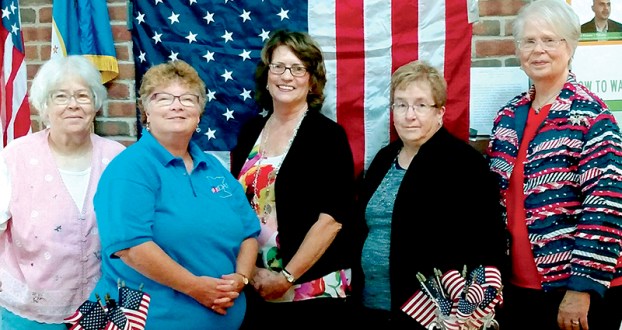 The Josiah Edson Chapter, National Society of the Daughters of the American Revolution, recognized Constitution Week at the Austin Public Library on Sept. 17.

Regent Ellen Blume and members Cheryl Potter, Sybil Pickett, Marilyn Prenosil and Sharon Jensen were pleased with the turn out. Special flags were available because of Austin’s Veterans of Foreign Wars club, and the club thanked veterans for providing them.

Seventy flags were handed out and over 100 handouts were given to both parents and children regarding the Constitution and American History.

Several copies of DAR’s magazine, “American Spirit” were on display, with the most recent copy identifying “Gouverneur Morris as The Constitution’s Wordsmith. Nicknamed the “Penman of the Constitution,” Morris is widely credited with putting the document in its final form, as well as writing the preamble.

A large parchment copy of the Constitution was also on display. 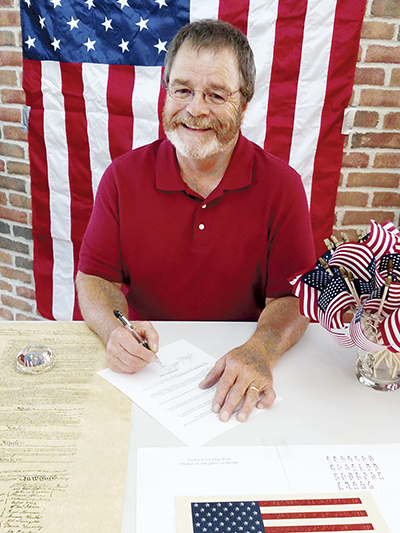 The U.S. Constitution is the oldest constitution still in active use in the world today and is the basic document of our republic, which protects the individual liberties of all citizens through written law.

On Sept. 17, 1787, church bells rang across the city of Philadelphia at 4 p.m. to commemorate the founders’ signing of the Constitution. A church bell also rang out at 4 p.m. on Saturday, Sept. 17 from Austin’s Grace Baptist Church’s west campus.

As well as commemorating Constitution Week, several DAR members donated new and gently used clothing, handmade lap robes, toiletry and personal items to the Veterans Hospital in Hastings. Alice Anderson organized this project and the donations have been delivered to the hospital by veterans from Austin.

The Josiah Edson Chapter was organized in 1905. Its 86 members reside in Austin, Albert Lea, Northfield, Farmington, Burnsville, Webster, New Prague, Faribault, Waseca and Owatonna. The meetings are held the first Saturday of each month at 10 a.m., (September through December; March through June). Most meetings are held at the V.F.W., Northfield; some at Castle Rock Methodist Church. We welcome you to explore DAR.

The objectives of the DAR are: education, historic preservation and patriotism.