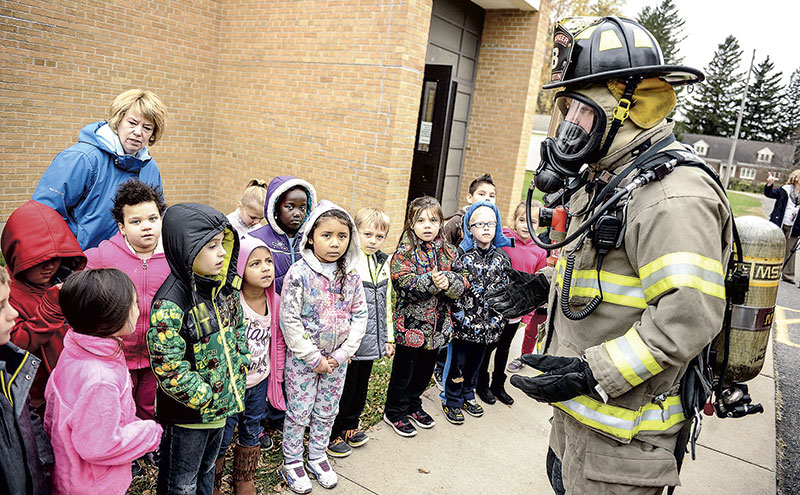 It was chilly outside, but there is nothing like a big dog to warm the day.

Sparky the Fire Dog visited Woodson Kindergarten Center on Tuesday, strolling through the halls and classrooms, handing out hugs.

October is Fire Prevention Month — the perfect time for children to learn about fire safety.

As Sparky was spreading his charm, Austin firefighter Hans Gilbert was treating kids to a close look at the Austin Fire Department fire truck pulled to the north side of the school. 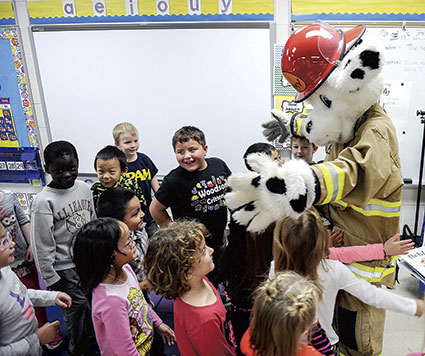 While kids oohed and aahed over the air tanks, ladders, Jaws of Life and other firefighting equipment, Gilbert took even more care when chatting about his own suit and equipment.

There was a reason, said veteran kindergarten teacher Ellie Verdoorn.

“Kids can be scared” of firefighters, once they are outfitted in their heavy suits, oxygen tanks and face masks.

“This way, kids can see him as a real person and they aren’t afraid,” she said.

Gilbert spent time reassuring the kids too. He slowly put on piece after piece of equipment, talking to kids between items.

“Underneath, I am still firefighter Hans, aren’t I?” he asked, to a round of nods. “You’re not scared of me are you?” A round of “nos” was returned.

“That is very important,” Verdoorn said. “Kids will hide if they are scared. If they aren’t afraid of firefighters, they will go to them when they are called.”

Last week, kids were invited to an open house hosted by the fire department as part of the months’ fire prevention activities.

Fire prevention activities are not only good for kids, but also serve “as a reminder for parents to check that smoke detector of batteries too,” Verdoorn said.