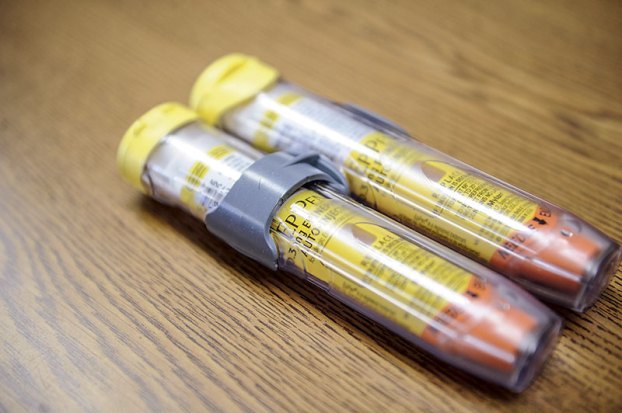 EpiPen users were dealt a blow recently when it was announced that prices were being raised by as much as $600. Eric Johnson/photodesk@austindailyherald.com

Adjusting for the need; EpiPen users struggle to adjust for inflated prices

Heather Ruzek’s EpiPens are nearing their expiration, but she’s trying to stall before she buys a new two-pack after her price skyrocketed from about $100 to $730.

“I’m dragging my feet hoping that they’ll figure something out here quickly because it’s not like you just have $730 ready to go,” Ruzek said with a laugh. “At least I don’t.”

EpiPen, the injected emergency medicine for severe allergic reactions to foods and bug bites, and its maker, Mylan, have been at the center of healthcare discussions in recent weeks after the company’s frequent price hikes pushed EpiPen’s list price for a package of two syringes to $600 — if not more.

That’s a strain for people like Ruzek, an early childhood special education teacher who carries an EpiPen at all times due to peanut and tree nut allergies.

But she’s not alone as she works with Melissa Kossoris, a school psychologist who must carry EpiPens for her 3-year-old son, William, who also has peanut and tree nut allergies.

Ruzek and William are just two of the roughly 40 million Americans who use EpiPens for severe allergies to spider bites, bee stings and foods like nuts, eggs and shellfish. 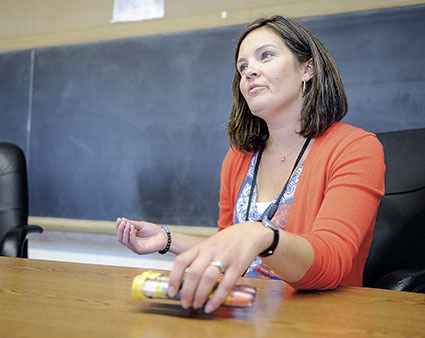 Heather Ruzek, who has a peanut and tree nut allergy, talks about the rise in Epipen that has skyrocketed prices by $600. Photos by Eric Johnson/photodesk@austindailyherald.com

While William’s first and only reaction came with a rash around his mouth, Ruzek has had multiple adverse reactions and her airway has started to swell during past incidents.

Overall, people with severe allergies are at risk for a serious reaction — anaphylactic shock. Symptoms quickly escalate from wheezing, hives and skin swelling to rapid heartbeat, trouble breathing and convulsions and, without treatment, possibly death.

Both Ruzek and Kossoris admit recent price hikes are a strain, especially since EpiPens are something they can’t go without.

“I just felt frustrated for all of us who have to buy it,” Ruzek said. “It’s not a choice. It’s a life-saver really. You can’t go anywhere without it.”

Kossoris was frustrated because she previously bought two EpiPen two-packs. That way she, her husband and William’s daycare could all have a pen along with an extra around the house. That won’t be the case now.

They just purchased a single two-pack.

“Now I need to figure out how to make sure there’s an EpiPen near William at all times, so it’s more just juggling that,” Kossoris said.

“I think just for that assurance — it’s one and done,” she said.

Once during a severe reaction, Ruzek’s husband, Tim, accidentally administered the shot to himself when helping her after not realizing she’d taken off the cap.

Ruzek then went to the emergency room. Ruzek has never used one on herself, but she’s had several adverse reactions that landed her in the ER, where doctors then told her she should have used her EpiPen.

Though Kossoris hasn’t had to use one on William, she always has them around. 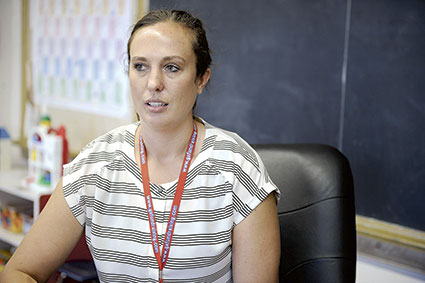 “Now I need to figure out how to make sure there’s an EpiPen near William at all times, so it’s more just juggling that.” — Melissa Kossoris

Most EpiPens expire after about a year. And with high insurance deductibles, both Ruzek and Kossoris buy the EpiPens out of pocket.

Kossoris buys the generic EpiPen, which is a bit cheaper at a new price of $300, and Ruzek plans to buy those next.

Ruzek and William discovered their nut allergies in the same way: Their parents gave them a peanut butter sandwich as a one-year old and they broke out. Kossoris ended up getting William a blood test that revealed the allergy.

Ruzek, who has carried EpiPens her whole life, said each reaction since has gotten worse and they’re never the same. Often times, she doesn’t even know what caused the reaction.

Ruzek cautioned that people should know severe nut allergies can be a life or death situation — it’s much more than an intolerance or discomfort.

“We always have it in the back of our mind as far as when we’re eating food or going to new places,” she said.

Ruzek is very careful, only eating at certain restaurants and reminding the staff of her allergies. She also refrains from eating food at family occasions or picnics.

Kossoris has spoke a lot with Ruzek about food chains at which her family can eat. Both women say most people are understanding about the allergy, though Kossoris said it can be stressful to entrust William into others’ care.

“People are usually really understanding, but it is nerve-wracking knowing that you’re relying on somebody else sometimes to make sure that everything that he is around is OK for him, but people have been really great here so far,” Kossoris said.

At the grocery story, the two typically read every listed ingredient to make sure there are no nuts or weren’t produced in a family that makes nuts.

But the two warn it can change quickly. After she’d stopped checking labels for a bit, Kossoris noticed a type of Wheat Thins had a slightly changed box and found out it was now being made in a factory that produced Wheat Thins.

Kossoris said her pharmacist told her to contact Mylan in the hopes that enough people would contact them and urge them to drop their prices.

And Ruzek is still waiting for the prices to drop.

“I’m hoping that they can come up with something better,” she said.

—EpiPen’s maker, Mylan, has a virtual monopoly on epinephrine injectors, potentially life-saving devices used to stop a runaway allergic reaction. Mylan N.V., which has headquarters in Hertfordshire, England, and Pittsburgh, has hiked prices as frequently as three times a year over the past nine years, pushing its list price for a package of two syringes to more than $600.

—Roughly 40 million Americans have severe allergies to spider bites, bee stings and foods like nuts, eggs and shellfish. They at risk for a serious reaction — anaphylactic shock. Symptoms quickly escalate from wheezing, hives and skin swelling to rapid heartbeat, trouble breathing and convulsions and, without treatment, possibly death.

As a precaution, many carry EpiPens, which contain the best “antidote,” the hormone epinephrine. Last year, more than 3.6 million U.S. prescriptions for two-packs of EpiPens were filled, according to data firm IMS Health. That earned Mylan nearly $1.7 billion.

—In an emergency, the syringe is jabbed against the thigh. The needle inside injects the epinephrine into muscle tissue. But that can be difficult in a panic or with a child who won’t hold still. The syringes expire after a year.

—Like all drugmakers, Mylan periodically hikes its prices. In 2007, when Mylan took over rights to EpiPen, a pair of syringes cost $93.88. According to Elsevier Clinical Solutions’ database of prices set by manufacturers, Mylan raised the price 5 percent in 2008 and 2009, when a competitor hit the market. Its price jumped 20 percent in late 2009, followed by a series of 10 percent and 15 percent increases. The price hit $609 per pair in mid-May.

—In the U.S., drug manufacturers charge what they think the market will bear. Unlike other countries, the U.S. government doesn’t regulate drug prices, though the Veterans Affairs and Medicaid negotiate big discounts. Mylan hasn’t answered questions about how it justifies its price hikes. A statement released Monday didn’t address prices.

—One cheaper product remains on the market, Adrenaclick. But EpiPen, introduced in 1987, is so well known that most doctors prescribe it without considering Adrenaclick, and pharmacists can’t substitute that for EpiPen, said Evelyn Hermes-DeSantis, director of drug information services at Rutgers University’s pharmacy school. A pair of Adrenaclick syringes costs $142 to $380 at pharmacies, according to online comparison sites.

—EpiPen has a U.S. patent giving it a monopoly until 2025, according to Evercore ISI analyst Umer Raffat. Generic maker Teva has permission to launch a version but hasn’t gotten regulatory approval yet. A rival injector called Auvi-Q was recalled last year because of potential inaccurate dosing, Raffat noted, and a third product has twice been rejected because of issues with the injector.

The Austin Church of Christ will host Jill Ensor at 10 a.m. on Sunday as she talks about her mission... read more