Eye to the sky: Austin Public Library now offers a pair of telescopes for checking out the night skies 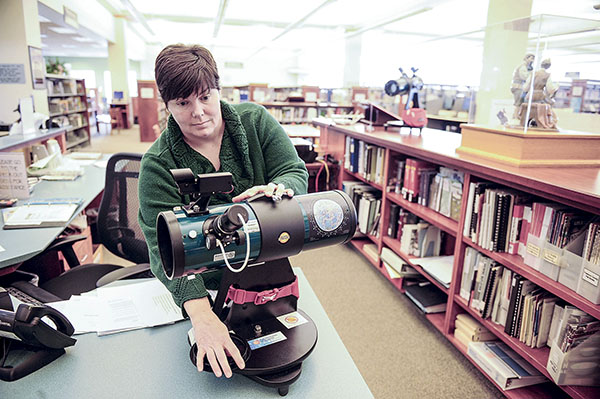 The stars have come a lot closer thanks to a recent purchase by the Austin Public Library.

Through a special trust the library has been able to tap into over the years, it has purchased a pair of telescopes that people with adult library cards can rent to view the universe surrounding us.

The telescopes are compact enough to take to a favorite viewing spot to catch everything the heavens have to offer.

“I think it opens avenues for families to spend time together and do something completely different,” said Kris Olson, the library assistant who assembled the telescopes and figured out how they are used.

The idea to purchase the telescopes, while a step forward for the library, is not a new idea among libraries in general.

“It’s not a particularly novel idea,” said Library Director Ann Hokanson. “ [These] are designed to go into public libraries.” 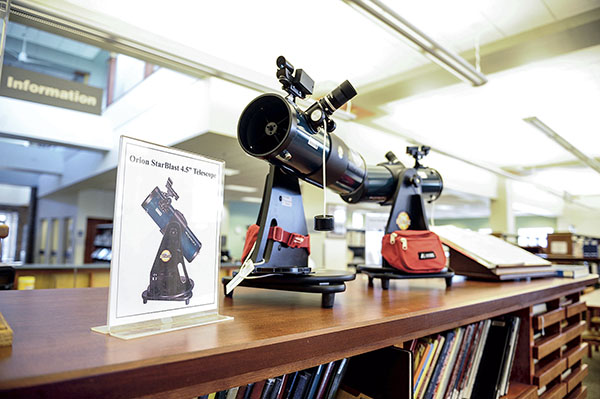 A pair of telescopes sit out on display at the Austin Public Library. The newly acquired telescopes are now available to be checked out. Eric Johnson/photodesk@austindailyherald.com

Hokanson said the idea to purchase them for Austin came from some advertising she came across for space programs coming to libraries. Once the decision was made, the library used money from the Walter Wienke Fund which is money that was set aside at the bequest of Wienke, who was an area farmer.

When he passed he set aside $300,000, with the stipulation that the interest be used by the library for special projects for three years.

The telescopes arrived fairly recently, though it took some time to get used to them, including how to successfully operate them.

“It’s a lot of pieces,” Anderson said. “It took a while laying it out and getting everything attached.”

And while it took a little bit to get the operation down, in the end it went pretty smooth.

“A few things were made clear by the manual,” Anderson said.

Operating the telescopes is a fairly straight forward as they come with everything you would need to watch the stars.

You simply point the telescopes to where you want to look and zero in closer using the EZ Finder II which puts a red dot on the specific area you want to observe. After that simply focus and enjoy.

The kits also come with a consolation guide to help people navigate the stars.

Hokanson reiterated how nice this purchase will be for the library and what it means moving forward in terms of adding more science content to what the library offers.

“It’s a nice way to offer something different,” she said. “We’ll probably choose to have something else in science with our next purchase.”

“We would like to support an emphasis on STEM (Science, Technology, Engineering and Math) and Austin Aspires to create a community of learners,” she added.