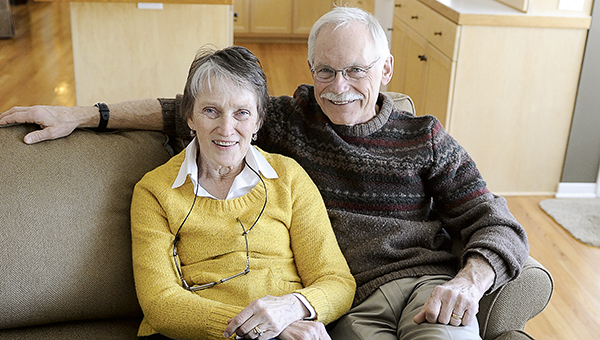 To his friends and family, saying Dr. Richard “Dick” Schindler was involved in the Austin community would be an understatement.

“He was such an amazing man who touched so many people in this community,” said Erik Schindler, the oldest of Dick’s four children. “I’ve never seen somebody fight so hard for the community.”

Many in Austin were surprised to hear Dick passed away Saturday, Oct. 18, 2014, following a bicycle accident when on his way to meet a friend to help clean bike trails near Riverland Community College. He was 72.

“It’s easy to look at him just as a dad but you can’t, because he was so much more than that to so many people,” Erik said.

Along with delivering more than 4,000 babies during his medical career, Dick was an active community member, a friend and a mentor.

“It wouldn’t surprise me if over 75 percent of the town knows who he is,” Erik said. 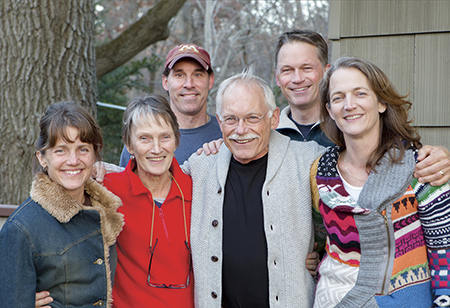 Dr. Dick Schindler, with his wife Belita, and, four children, was a devoted family man and pillar of the community. — Photo submitted

Family members remembered Dick as an active family man, teaching the grandchildren how to drive a manual transmission at age 13 or hiding under the children’s beds and jumping out after they were tucked in, which they called the “bedbug.”

His family won’t forget Dick’s big bear hugs or the many medical students he mentored.

Granddaughter Jevita Poer recalled that Christmas could change from 20 people one year to 35 the next.

“Both Dick and Belita, they just pull people in; there’s no boundaries to the family at all,” Poer said.

Dick was born Feb. 23, 1942, in Fargo, N.D. His sister, Becky Repinski, recalled growing up in Barnesville, Minnesota, with her three older brothers.

“Dick was the middle brother and definitely a wonderful brother,” she said.

Repinski recalled her brother enjoying fitness at a young age, and he and his brothers made their own weights with cement and tin cans.

Dick was the high school valedictorian and initially went to school to be a paint chemist, but that’s not where he’d end up.

“He ended up in medical school,” Belita said with a laugh.

Dick graduated from University of Iowa Medical School and interned in Biloxi, Mississippi, before completing his medical studies in the United States Air Force Academy hospital in Colorado.

Yet with all his successes, he didn’t take on these projects alone. His married Belita Softing in July of 1964, and she stood by his side for more than 50 years.

“These two were a team, and for everything he does, she’s every bit as active in the community,” Erik said. “They were definitely two that complimented and made each other.”

Dick joined what is now Mayo Clinic Health System in Austin in 1972, and he was also based at the Adams clinic for many years. As a doctor, most recall Dick’s interest in not only his patient’s health and wellness but also their lives.

“He had this unique ability to make whoever he was talking to feel special, he would give you his undivided attention, and he was inherently interested in who you were as an individual,” Operations Administrator Tammy Kritzer said.

Co-worker and friend Dr. Fred Bogott recalled Dick always learning the newest information to stay on the top of his game. And Bogott also remembered Dick’s heart for others.

“Very bright, very outgoing, he knew everybody,” Bogott said. “He had no unwillingness to talk to anybody.”

Many patients would ask specifically for Dick to be their doctor.

“He was well loved, one of the most loved physicians I’ve known,” Bogott said.

Kritzer said many of Dick’s Austin-based patients drove to Adams when he started there.

“They were so connected and committed to having him take care of them,” she said.

Dr. John Coppes, an OB-GYN at Mayo Clinic Health System in Austin, remembered Dick as “a pillar of the community” and as a gentleman.

“He was a physician, he was a teacher, just an all around a wonderful guy,” Coppes said. “He’s really going to be missed by a lot of people.”

Coppes described Dick as a physician other doctors could emulate — a caring doctor who took the time to meet with each of his patients. Coppes also remembered Dick having a firm command with complicated patients and always being willing to help colleagues. At the same time, Coppes said Dick wouldn’t hesitate to ask others for help.

“If you knew Dr. Schindler personally you would be amazed and impressed by his fund of medical knowledge,” she said.

At one point, Dick won the Caring For Your Life Award, which is given to someone who cares for not only health and wellness but the patient as an individual.

“I can’t think of anyone who deserves that award more than Dr. Schindler,” Kritzer said.

Though Dick retired from Mayo Clinic Health System on Dec. 31, 2011, he wasn’t a stranger to the clinic. Kritzer recalled his willingness to fill in for a shift at the emergency room or help train staff, even after retirement.

“There’s no official role to be taken over but there’s no doubt we will miss his presence and his ongoing positive impact with our staff,” Kritzer said. “This loss is, it’s something that I think everybody at the medical center is taking time to process.”

Coppes said Schindler’s former colleagues were saddened to hear of Dick’s passing, and many found it difficult to believe — some even asked if there was another Dick Schindler in Austin.

“He was a good man and well beloved by thousands of people,” Coppes said.

Many knew Dick as a passionate member of the community who had a love for helping and making others happy. He chaired the YMCA board of directors, participated in the city of Austin’s Police Civil Service Commission, and served on Vision 2020’s Community Recreation Center Committee, among other things.

City leaders took time to honor Dick Monday during an Austin City Council meeting and to emphasize how much the city will miss Dick’s presence.

“He was the backbone of our community,” Mayor Tom Stiehm said. “I don’t think there’s anyone whose loss could affect the community more.”

Belita and Dick helped out at the Jay C. Hormel Nature Center. One year Dick decided to help families rent skis for a cheaper price. He told the center to charge families $1 per person to rent skis, and he would pay the rest.

Dick, along with Belita, was also an avid supporter of Austin’s arts community. Austin Area Commission for the Arts Executive Director Jennie Knoebel remembered Dick helping set up for the Austin Artworks Festival each year, helping move art and the furniture into the new Austin ArtWorks Center, and volunteering in other ways.

“He was a very giving person and was always willing to step in and help whenever we needed it,” Knoebel said. “He just was a very selfless person, he really cared about people and the community, and we were very fortunate to benefit from him, from his generosity and his compassion.”

Dr. Tim Rietz met Dick in 1979, when he and his wife, Bonnie, moved to Austin from Hennepin County.

“We interviewed here and Dick and Belita were part of the people showing us the town, and we were so impressed,” Tim said.

Dick had been practicing for three to four years before Tim moved to Austin, and he left for the Adams clinic around that time. Tim recalled being disappointed they wouldn’t practice together, but the two formed a fast friendship.

“He was such a gregarious guy, just a master in everything he seemed to do,” Tim said.

Tim and Bonnie, Dick and Belita, and Fred and wife, Caroline, would go on mystery trips to places like Mexico, Milwaukee, Philadelphia and Kansas. The couples took turns each year deciding where the trio would go, only telling the others what weather to pack for.

“We just had fun times as couples that way,” Tim said.

The three couples lived close to each other, and Tim recalled the Schindlers frequently hosted events for their children and grandchildren: building a big snowman each year, holding a pumpkin carving contest for the grandchildren, playing croquet, biking and canoeing, and more.

Tim said Dick lived each day to its fullest, continually learning and then sharing information.

“We can learn from people like Dick,” Tim said. 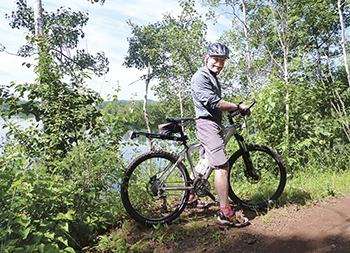 Among his many passions, many knew Dick for his love of biking. Poer told a story of her grandfather building his first bike from scraps he found in a junkyard in his hometown — then that bike was later stolen. In 2011, he and four others biked more than 3,500 miles from Oregon to Massachusetts.

Julie Thomsen mapped out the trip and followed the five riders in an RV.

“Every day Dick would get up and he was like a little kid in a candy shop,” she said. “He just couldn’t wait to get on that bike.”

“We knew each other before that but on the coast to coast we were together for 35 days 24/7, and you get to know people,” Ulwelling said. “Not once in those 35 days did I ever see anything but that high level.”

Since Dick was the doctor on the trip, Thomsen recalled everyone going to him with aches or pains. When Julie’s husband, David, was injured, he went to Dick.

“He stayed with Dave the whole time to make sure he got to the hospital and got the right care,” Thomsen said.

Dick was also a runner for many years before an injury forced him to stop. He also used to roller blade, was a cross-country skier, and even had summer skis, along with many other activities — even knitting.

Yet he didn’t keep these experiences to himself.

“He would lend you a bike or any gear that you needed, he would just really do anything so that everybody could have a great experience,” she said.

Thomsen shared a story of Dick getting about a dozen friends together for a triathlon, and the the group biked, ran and canoed from the Iowa border to the Canadian border.

“He was an amazing man, he made all the rest of us look like slugs,” Thomsen said with a laugh. “That man was just a whirlwind.”

—Trey Mewes and Jason Schoonover contributed to this report.