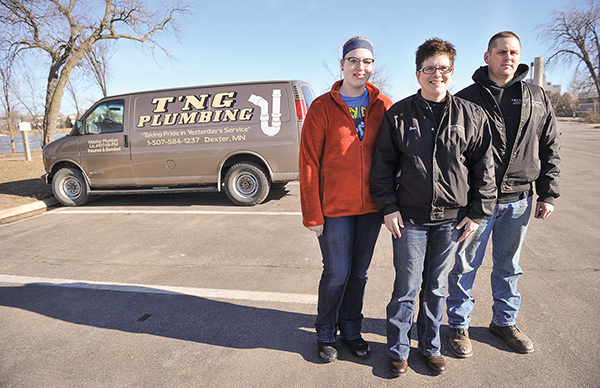 The Grundmeier family, Gina and Todd and their daughter Emma, left, have seen their share of hardship when their house burned in 2010 and then several weeks after Emma suffered a seizure and got into a car accident. But two years later the family has started T’NG Plumbing and their daughter is going to college.

Life is anything but easy for one family from Dexter, which is why they cherish it so much. They don’t complain, even during the toughest times.

In November 2010, Todd and Gina Grundmeier’s house burned to the ground. Gina and two of her daughters, Emma Waters and Madison Sladek, awoke to smoke and flames. By chance, they were all in one room, and they ran outside in panic.

“The state fire marshal said the girls never would have made it out,” Gina said.

While the fire department was on its way, the three shivered and watched the second floor of the house become the first floor. Nearly everything they had perished in the blaze.

Several days later, Waters suffered a seizure while driving. She rolled her car at 55 mph and suffered injuries to her head and arms, although she has completely recovered. Even before all that, Todd wasn’t getting enough hours at work. The problems were piling up.

“We were doing all we could to pay our mortgage,” Gina said.

Furthermore, Gina had been pushing Todd to start his own plumbing business — not an easy decision.

“He wasn’t kidding when he said I pushed him,” Gina said. “I pushed him for three years. I’m Irish and German.”

Obviously, the Grundmeiers couldn’t afford another setback. But after being kicked while down so many times, risk taking wasn’t a big deal. What could be worse? Sometimes risks pay off, and they did.

In just their second year of business, the Grundmeiers have already added one employee. Gina even said they’ll have to get another van soon.

“I thought the first five years I’d just be by myself,” Todd answered, in a rush. He was on the run, in the middle of another busy workday. He had a few minutes to chat, but a few more customers. The Grundmeiers started T’NG Plumbing (which stands for Todd and Gina) less than four months after the fire. In two years, T’NG landed accounts in nearly every town in Mower County. Todd even goes to Albert Lea.

Gina spends life with a phone by her side. Vacations include work, too.

Some small businesses hesitate to advertise. T’NG puts up billboards.

“I couldn’t have a better position,” Gina said. “As a wife, I get to tell him what to do and tell him where to go.”

That could be stressful, but it’s OK.

Make no mistake, though. The whole family is happy with the arrangement. As mentioned, they don’t complain.

“We’re all in this together,” Gina said. “This is a family venture. He doesn’t want to let anybody down when it comes to his business.”

Todd has been plumbing since 1993, after he got out of the Navy. After 20 years of connecting pipes and fixing water heaters, that could’ve become mundane for anyone. For Todd, though, it’s about pride. Even when he didn’t have his own business, he took care of his customers as if they were his own, Gina said. Perhaps he gets some of that mentality from her. That’s Gina’s lifestyle.

“I guess I really like it,” she said. “My lifestyle is taking care of people.”

The fire still hangs in the back of their minds, but they moved on and moved into a new house. Something like that sticks with people forever. But they don’t look back and ask “why?” They’re thankful.

“I still think about it, not the fire, but how lucky I was to make it out,” Waters said. “I just try to look at the better sides of it, I guess.”

And Waters, Madison and Gina already have enough to deal with every day. Waters, 19, copes with schizophrenia. Madison, 13, has Asperger’s syndrome, and Gina has generalized anxiety and post traumatic stress disorder. Waters and Gina aren’t afraid to talk about it, either. They want people to know about such disorders instead of running from them. They want people to understand them, not avoid them.

Besides the new business, Waters is progressing in college and practicing with the Riverland theater department. And both Gina and Waters have become certified speakers through the National Alliance of Mental Illness, and will give speeches about how they cope. No matter how busy, stressful or painful life becomes, the Dexter family that has been through a lot won’t give up.

“We sustain and manage and press on,” Gina said.