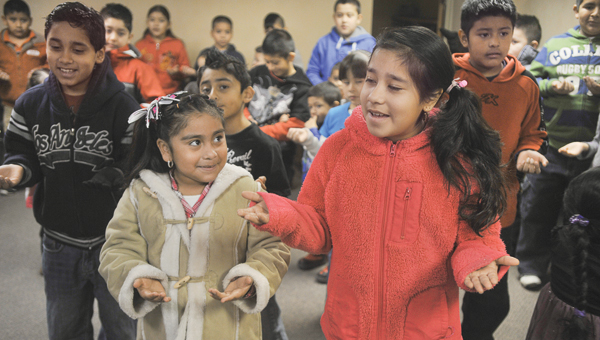 Guadalope Garcia-Rodriguez, right, and Valeria Garcia-Jimenez, left, pray with other kids during a special kids’ service in the basement of Queen of Angels Catholic Church. — Eric Johnson/photodesk@austindailyherald.com

Queen of Angels reaches out with Spanish-speaking mass

This story originally appeared in Progress 2012, which published Sunday, Feb. 26.

At Queen of Angels Catholic Church in Austin, the clergy has been reaching out to the local Hispanic community for years. But some say outreach can be difficult because many Hispanics leave town after being here only a short time. 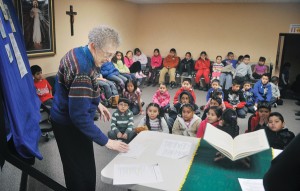 Sister Ruth Snyder leads a special kids’ service during the regular service at Queen of Angels Catholic Church. Queens is an outreach point for the Spanish speaking Hispanic population.

Father Dale Tupper, who leads Spanish-speaking mass, said attendance has dropped slightly in recent years because many Hispanic are leaving.

“We do notice a lot of people leaving the community,” Tupper said.

The parish tries to cater to this rising trend in the Hispanic community, according to Pastoral Associate Mary Bassett. Bassett is responsible for catechetics at Queen of Angels, so she coordinates the first communion and confirmation classes.

Because families leave town so often, Bassett said the church has a one-year communion program instead of a longer program like many churches have.

“We’ve had children leave the program because their parents leave town,” Bassett said. “Some of our really good parishoners have really struggled to stay here, who would have been an asset to the parish.”

Although there is less stability in the Hispanic parish than in its Anglo counterparts, according to Sister Ruth Snyder, the Hispanic community maintains its vibrancy in worship and faith.

Snyder said the clergy at Queen of Angels strive to make the parish a welcoming area for Hispanics, especially because it’s a cultural group that endures many challenges living in the U.S. Bassett agreed and said the cultural difference between the Hispanic and Anglo parishes are easy to see.

Sister Ruth Snyder leads a kid's service during the regular service at Queen of Angels Catholic Church. Queens has been an outreach point for the Spanish speaking Hispanic population.

“It’s a vibrant, alive community,” Bassett said of the Hispanic community. “It’s a spirit of optimism despite the difficulties they are living with.”

Bassett said it’s interesting to see the cultural differences in action, as both parishes contribute to the church in distinct ways.

The Anglo community tends to be more traditional, particularly in its organization of the church, but Bassett has noticed the Hispanic community doesn’t act based on tradition. She indicated this has brought a fresh sense of liveliness.

“The traditional organizational structure we’ve had in the church isn’t the same as the structure the Hispanic community brings,” Bassett said. “They provide a gift to the church that the Anglos do not.”

Part of that gift is Hispanics’ family-oriented outlook, Bassett and Snyder have noticed.

Some of those feelings show themselves in raffles, breakfasts and activities planned by the Hispanic parish to benefit the church, Snyder said.

Tupper said the Hispanic community’s faith is obvious by the actions of the parish, and he wishes they would stay in town and the parish longer.

“The people I deal with are some really, very fine Christian people,” Tupper said. “These are bright, talented people who fled from serious trials across the border in Mexico, and they have good skills. They’re good workers.

“They’re everything America would want.”