Get Fit Be Fit rolls forward

This story originally appeared in Progress 2012, which published Sunday, Feb. 26.

A year and a half ago, Cindy Bowe was not the person she is today.

Bowe, of Austin, was once 65 pounds heavier and on blood pressure medication, but now she can say she has completed a triathlon. She can attribute her success to hard work, but she credits the United Way of Mower County’s Get Fit Be Fit program for getting her started on the road to wellness. 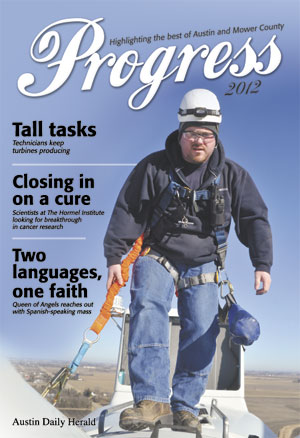 This story appears in Progress 2012, which published Sunday, Feb. 26. Look for it on newsstands.

“My biggest problem … was millions of reasons why (exercise) didn’t work into my schedule,” Bowe said.

That changed last year, when Bowe joined some co-workers and formed a team for the Mower County United Way’s Be Fit challenge. Although she had participated in the Get Fit challenge for a few years, last year was when Bowe started to take things seriously. Bowe said the program was just what she needed to maintain motivation.

“Last year was when I actually stuck to things. It took a little while to get back into a good routine,” Bowe said. “The online logs just made you more aware.”

Since joining a Be Fit team last year, Bowe has lost at least 65 pounds. She learned in March 2011 that she no longer needs the blood pressure medication she had been taking for three years.

Mandi Lighthizer-Schmidt, executive director of United Way of Mower County, said many people use the Get Fit component of GFBF to start a regular exercise routine.

“The Get Fit people are looking to get the tools to try to start their journey,” Lighthizer-Schmidt said. “Be Fit people tend to be working out on a regular basis (already) and want to see who can be the most fit.”

Although the two programs are similar, there are differences. Get Fit is an 11-week team fitness and weight loss competition, whereas Be Fit is lacking the weight loss component. The Be Fit fitness challenges are typically more difficult than Get Fit challenges.

In the last five years, GFBF participants have lost 11,790 pounds. Many participants return year after year. Bowe is on a team with co-workers from the YMCA again this year, and once again they are taking on the Be Fit challenges.

One of the 2012 Be Fit challenges is to complete a triathlon, something Bowe did with her son last May.

“Whatever gets you moving is good,” Lighthizer-Schmidt said. “Our aspect is: just start somewhere.”

The United Way strives to promote health and wellness within communities, so Lighthizer-Schmidt said starting GFBF in Austin a few years ago was an exciting time.

“At the time we started Get Fit, there wasn’t anything else for wellness in town,” said Lighthizer-Schmidt. “We’re it for community based wellness challenges.”

The program has evolved plenty over the years, with the online logs Bowe loves being one of the most recent additions. Feedback from previous years’ participants indicated people wanted a way to track their progress, Lighthizer-Schmidt said. People also said they were having a hard time knowing where to start at the beginning of the 11-week challenge, so the United Way created a calendar of challenges. Now, there are three four-week challenges. Providing participants with challenges not only guides them, but also makes things more competitive.

“People really just said, ‘I don’t know where to start,’” Lighthizer-Schmidt said. “When people set a goal … and they achieve it, they are motivated and want to continue.”

Although the average weight loss per person fluctuates between three and five pounds each year, Lighthizer-Schmidt said some participants lose up to 50 pounds during the three-month challenge. Many people have told Lighthizer-Schmidt and other United Way staff their success stories.

Those stories are what drive Lighthizer-Schmidt to recruit more people for GFBF each year.

“Truly the individual success stories we have from people who started GFBF and lost 40 pounds or are off their cholesterol meds or are training for a run — that’s truly, for us, the success of the program,” she said.