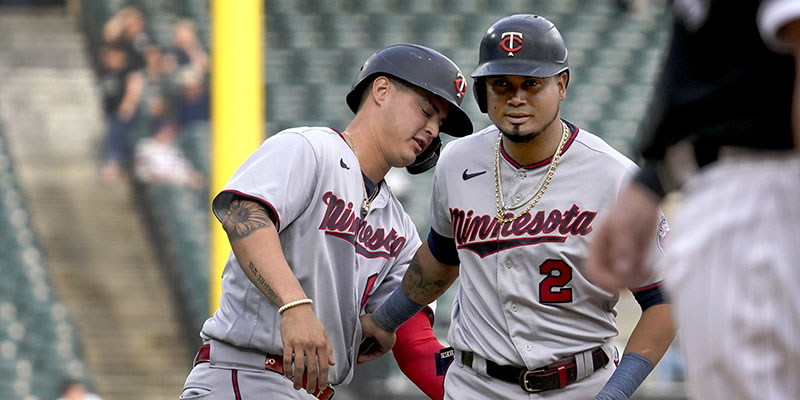 CHICAGO — Luis Arraez won the AL batting title, hitting a third-inning double after walking twice to finish the season at .316, and the Minnesota Twins rolled to a 10-1 victory over the Chicago White Sox on Wednesday.

Arraez was all but assured of topping the Yankees’ Aaron Judge for the batting crown when the day began. He removed any doubt by walking in his first two plate appearances and then hitting a drive that barely cleared the glove of right fielder Gavin Sheets before he was lifted for a pinch-runner.

“It’s amazing,” Arraez said. “This was one of my goals. I’m living a dream right now. This is amazing for me because I worked hard for this.”

Judge, who sat out the Yankees’ season finale, batted .311 with an AL-record 62 homers and a league-leading 131 RBIs.

“I couldn’t sleep last night, just thinking and thinking about it,” Arraez said.

Gary Sanchez and Jermaine Palacios homered during a six-run first inning for Minnesota, which snapped a four-game skid. The Twins finished at 78-84, a six-game improvement over 2021.

“I think he achieved what he was hoping to do,” Minnesota manager Rocco Baldelli said. “And he’s not a guy who normally thinks about things on a personal level like that. He’s a team player and here to win and compete.”

Arraez received a hug at the top of the dugout steps from Carlos Correa, who planned before the game to give him a Louis Vuitton roller bag in recognition of his achievement.

Sanchez hit his 16th homer, a three-run shot, off Chicago starter Davis Martin (3-6), and he added an RBI double during a three-run second. Palacios hit his second homer in as many games, a two-run shot. Martin was charged with nine runs in 2 2/3 innings and was pulled due to right biceps soreness.

“He was feeling a little cramping,” interim Chicago manager Miguel Cairo said. “I didn’t want to take a chance.”

Louie Varland (1-2) allowed four hits in five scoreless innings in his fifth major league start. The 24-year-old struck out five and didn’t allow a walk. Josh Harrison was the only Chicago batter to reach second base against Varland as he led off the second with a double. Varland rebounded by striking out Mark Payton, Romy Gonzalez and Adam Engel in succession.

Chicago didn’t score until the ninth, when Carlos Perez hit a one-out double off reliever Cole Sands to score Romy Gonzalez. Sands worked the last four innings for his first save.

“That’s not the way we wanted to finish, but they played hard the last month,” Cairo said.

“It was all the games you were looking for in the final game for us,” Baldelli said.

LAST CALL FOR CORREA?
Correa plans to talk to the Twins’ front office to see “where their head space is” before likely opting out of the final two years of his three-year, $105.3 million contract.

“You know this game enough to know what my decision is going to be,” Correa said. “I love this team. I love this organization.”

Correa could earn more annually on the open market.

“I want to make sure my son and family are taken care of, and the Twins can see the player that I am, the person I am and the passion for the game,” he said.

A DIFFERENT VIEW FOR ABREU
Chicago first baseman Jose Abreu elected to spend what could be his final day in White Sox uniform on the bench. Abreu, 35, is completing the final year of a three-year, $50 million contract and has indicated he wants to play next season. The 2020 AL MVP ranks third in franchise history with 243 homers over nine seasons.

WHAT’S NEXT
Chicago went 18-16 under Cairo after Tony La Russa was sidelined by health issues. La Russa announced Tuesday he would not be back next year.

General manager Rick Hahn said Cairo would be interviewed for the permanent job.

UP NEXT
Twins: Split-squad spring training openers in Florida on Feb. 25.

White Sox: Spring training opener against the Padres at Glendale, Arizona, on Feb. 25.