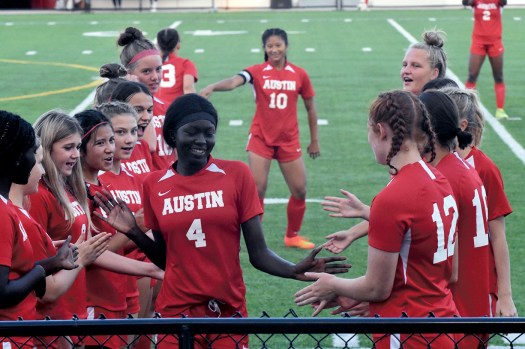 Austin’s Duna Oteng is greeted by her teammates during the starting lineup announcements in Art Hass Stadium Monday. Rocky Hulne/sports@austindailyherald.com 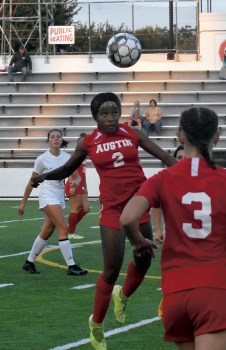 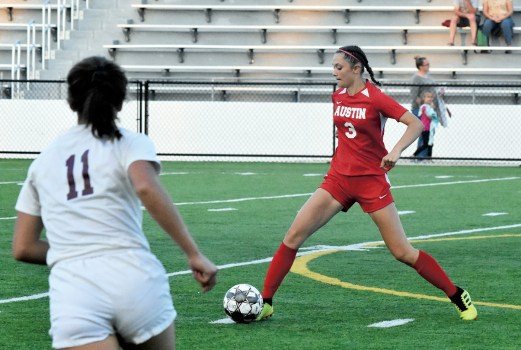 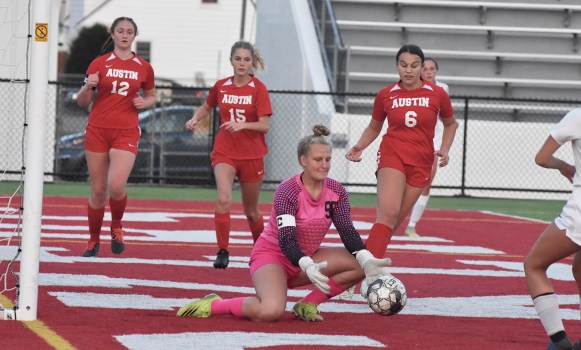 The Packer girls soccer team had its best offensive attack of the season, but Austin remains scoreless on the season after it was blanked by Stewartville 2-0 in Art Hass Stadium Monday.

Ellery Ravenhorst put the Tigers (3-6 overall) on the board with a penalty kick with 4:50 left in the first half and Stewartville made it a two-goal game when it scored with 7:20 left in the game.

“We’re still getting to know each other’s strengths and weaknesses and we created some great opportunities on the attack,” Austin head coach Jake Levisen said. “We’re still looking for ways to improve, develop more, challenge ourselves more and push that pace.”

The Packers (0-5 overall) fired off nine shots and Sarah Wangen, Adah Baron and Marie Tolbert all had some good looks. Senior keeper Mya Walters finished with 17 saves in net.

“I strongly believe we dominated the possession game tonight and they got a really nice goal at the end,” Levisen said. “You can’t do much about that PK. I’m proud of our hard work and we’re going to have a lot of games in the next two weeks.”

The Packers have been outscored 26-0 in their first five games.