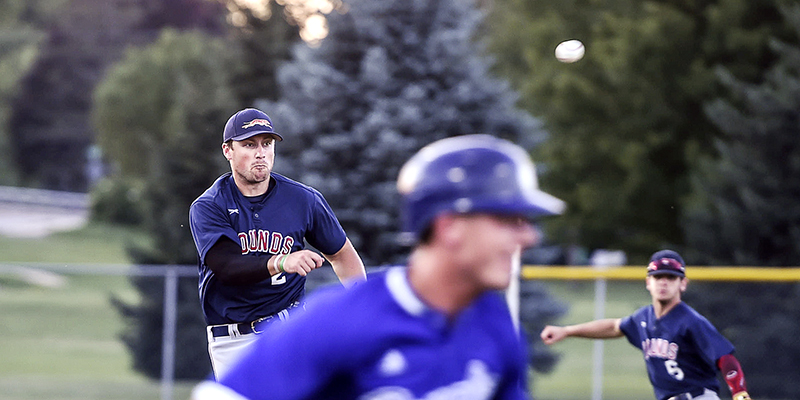 Minnesota is well known on a national level for two highly significant sporting venues. And, they aren’t the Gophers, Twins, Wild, Timberwolves, Lynx, Saints, United FC or even the Vikings.

Instead, the noteworthy team sports are the Minnesota High School Class 2A Boys Hockey Tournament and Amateur (town team) baseball leagues, consisting of teams of young (and mature) men from Rochester to Owatonna to Austin to small central Minnesota towns such as Arlington, Cold Spring, Green Isle, Milroy, Plato, Hamburg, Fairfax and Luxemburg just to name a few. Ever heard of them? On the Highway 212 corridor west of the Twin Cities, town team baseball is King.

It’s not uncommon for a tiny burg like Union Hill in Le Sueur County, population 952, to have its own baseball team and quaint ballpark. The park is complemented by the high-steepled St. John the Evangelist Catholic Church across the street and Union Hill Bar & Grill nestled conspicuously next door. The town serves its denizens quite well. Honestly, what more could one ask for in life?

I can’t continue without mentioning my favorite baseball town on 212, Sacred Heart. What blue blooded baseball fan couldn’t root for a team with such a holy-sounding name? It’s reported that the local priest throws out the first pitch every spring after marinating it in Holy Water for a fortnight or longer. In addition, the priest allegedly pulls confessional duty for a couple of hours after every home loss. For some reason, pitchers seem to be his most faithful patrons. That’s what I’ve heard, anyway.

The Class B and C town teams are full of folklore about players, managers and umpires who are often viewed by fans as being somewhat larger than life. Dolan, Brazil, Herd, Wohler, Dankowitch, Zwach, Serratore and Mauer are some family names that have filled town team rosters for generations. These family-filled teams have energized town team baseball for decades.

One of my all-time favorite baseball names is Larson. Specifically, Clinton “Tink” Larson of nearby Waseca. A true craftsman, Tink. Head coach, manager, player, head groundskeeper, chief statistician, rulers expert, third base coach, part-time psychologist and all-around “Rah Hah Guy” for the Waseca Braves. Man, could Tink hit a fungo! Ya think that’s how he got that moniker of his? Like so many others involved with the sport in small town Minnesota, Tink would (still to this day) do anything to promote town team baseball. A consensus Amateur Baseball Hall of Famer.

Tales and anecdotes about town team rivalries are abundant here in Minnesota. They are stuff that local legends are made of. The riff between the two Milroy teams is so heated, they refuse to play one another. The average Milroy fan must be claustrophobic because the town of 188 residents has two separate ballparks. One in town; one way out in the country. Players from Austin and Rochester continue to relish their face-to-face encounters for bragging rights several times each summer.

Now, stop for a moment and consider the two words “town team.” They suggest independence, home, turf, territorial rights and, in most instances, simple friendly competition. These mild tensions play out in balk parks across Minnesota every summer, generally to a satisfactory conclusion. Post-game gatherings between teams for a can or two of Bud Light in the parking lot with a discussion of the afternoon’s key plays illustrate the unique camaraderie among most opposing town team players.

Town team competition dates back to the 1950s and continues to be popular across the state 70 years later. A driver might be greeted by a sign at the city limits reading, “Green Isle Irish: 2003 Class C State Champions. Our own Austin Greyhounds had several outstanding seasons and highly successful state tournament runs in the 2000s. Several excellent players contributed to the team’s success.

Beautiful, iconic ballparks dot the Minnesota landscape. My favorite is the newly-constructed home of the Milroy Irish, situated in the middle of a cornfield, complete with a mini- jumbo tron beyond the right field fence, along with several other fan and player-friendly amenities. Green Isle, Sacred Heart, Arlington and Fairfax also showcase eye-appealing venues for weeknight and Sunday afternoon games. Marcusen Park in Austin is another memorable ballpark with a deep history of community involvement and tradition.

Regardless the field, young and old local men and women work tirelessly to keep the fields amply watered, mowed, lined and well manicured, and the concession stands continue to crank out Monster hot dogs, cheeseburgers and hamburgers, ‘seeds, popcorn, Cracker Jack, cheese-smothered nachos, Nut Goodies, fountain drinks and slushies, plus a wide range of other ball park delights. With such an All American menu, who would a fan even want the game to end?

The atmosphere is akin to attending the much-loved Minnesota State Fair in St. Paul at summer’s end. Livestock exhibits, rides on the midway and a never-ending offering of excellent “fair food” are all key attractions that draw people to the Great Minnesota Get Together. Ever enjoyed a pronto pup … er … or, I mean, corn dog on the midway? Mustard or ketchup? Ketchup or catsup? Talk about rivalries of unmatched proportions! Minnesotans love a good-natured dispute on occasion.

Late July and August is town team tournament time when hundreds of baseball faithful begin gearing up for the final push toward the Labor Day weekend championship series. It’s a fervent rush of activity as Class A, B and C teams compete for their respective crowns at selected sites in towns across the state.

It’s a big deal for the host towns who often sit on a waiting list for as long as ten years for their moment in the spotlight to finally come around. The wait can be excruciating. When the time does finally arrive, all those baseball-loving volunteers are more than up for the task of sprucing up the park and getting everything ready in preparation for the home plate umpire’s pronouncement of “Play ball!”

With this town team baseball fascination in our state, I would like to recommend the writings of Minnesota baseball author, Bill Meissner. His works include the memoir, “Circling Toward Home”, and baseball novels “Hitting the Wind,” and “Spirits in the Grass,” the latter which earned Meissner the Midwest Book Award. For me, his books are a trip down the memory lane toward Minnesota Nice.

A former creative writing professor at Minnesota State, St. Cloud, Meissner has also written works of poetry and a collection of short stories. His writing is engaging, insightful, light-hearted and, at times, poetic. His books are recommended reading for fans who eschew the ever-present corporate footprint infecting today’s version of professional sports.

What is the popular expression that we have all heard linked to American sports? “For the love of the game.” An age-old call for a pure, honest, more innocent approach to competition and to living life. In these times more than ever, it’s the sort of perspective needed in our fast-changing, ever-evolving world. Meissner connects his reader to a unique set of timeless values.

This sense is what Bill Meissner brings to his fiction and to his subjects. I urgently ask you to give one of his books a read. I think you’ll be glad you did.