Police are looking for a 19-year-old man believed to have shot another man early Sunday morning on Louis Street in Albert Lea. 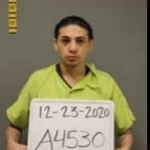 According to the Albert Lea Police Department, officers were dispatched to the 1300 block of Louis Street at 1:59 a.m. after receiving a 911 call of a man with a gun.

As officers arrived, they heard what sounded like a gunshot, and an officer observed an individual running east from Louis Street in dark clothing. Though they attempted to follow the person, they were unable to locate the individual.

Authorities further searched the area with the help of the Freeborn County Sheriff’s Office K-9, and the suspect was last seen in the 1200 block of Dunham Street.

The Police Department stated a 34-year-old man was outside of the residence of the shooting on Louis Street and had suffered a gunshot wound to his lower extremities. He was taken to Mayo Clinic Health System in Albert Lea by Mayo Ambulance.

The Police Department has identified Javen Juan Moreno as the suspect in the shooting. According to a press release, he is believed to be armed with a handgun and should be considered dangerous.

Police, however, believe the shooting was an isolated incident and do not believe there is an ongoing threat to public safety.

Anyone with information about Moreno’s whereabouts should call the Police Department at 377-5200.

The investigation is ongoing.