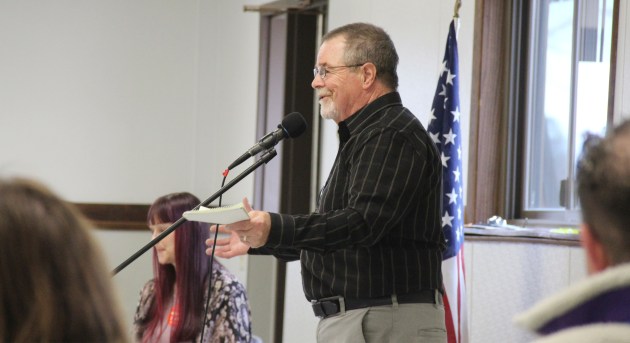 Tom Stiehm speaks to the delegates in attendance at the endorsing convention Sunday at the Union Center in Albert Lea. Stiehm won the DFL endorsement for the District 23B seat. Sarah Stultz/Albert Lea Tribune 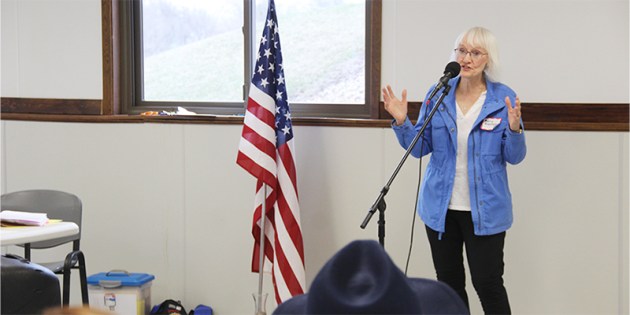 Mary Hinnenkamp of Albert Lea speaks at the endorsing convention Sunday afternoon in Albert Lea before being endorsed at the DFL House District 23A candidate. Sarah Stultz/Albert Lea Tribune 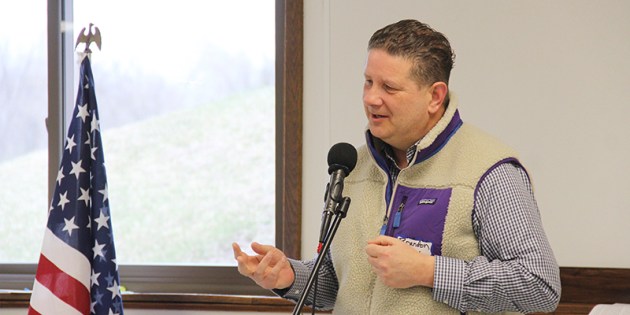 Albert Lea’s Hinnenkamp endorsed for 23A

DFL Party delegates from across the newly formed Senate District 23 selected their Senate and House district candidates to endorse Sunday at the Union Center in Albert Lea.

Lawhead, who grew up in Austin and has had Lawhead Law Offices for about 25 years, said he felt a call to service after the events at the U.S. Capitol on Jan. 6, 2021. He has also worked with a lot of people, including union workers, small business owners and others over the years, and felt he could contribute as a “centrist” candidate.

“The polar extremes are doing all the talking, and there’s nobody in the middle that’s representing all those in the middle,” Lawhead said.

Talking about former U.S. Sen. Paul Wellstone, who he said was always fighting for the underdog, Lawhead said he would try to be a candidate who could see the bigger picture and work across the aisle.

“That’s something of the basis of the campaign I want to run,” Lawhead said. “I don’t want to get into the mudslinging or the negativity on each side.

He also talked about the need to recognize why some in the party may be voting elsewhere and to figure out what can be done to bring them back.

He and his wife, Jennifer, the director of community education for Austin Public Schools, have three children, ranging in age from high school to college age.

“One thing we can do is give everyone an education,” he said.

Hinnenkamp said she learned the value of hard work and working together as a child picking up rocks in the field with her siblings. Her family had a dairy farm in central Minnesota.

She said she graduated from St. Cloud State College in teaching English and served with her husband with Volunteers in Service to America in western Kentucky. They also worked as counselors in group homes in the Bronx, New York, suburban Chicago and Washington, D.C.

They moved to Albert Lea after the birth of their twins, where her husband started working at Legal Services and she began working at the Area Learning Center, a place for students at risk of not graduating or graduating late. They also have an adopted daughter.

She said during her time at the ALC, they helped get almost 750 students graduated who might not have otherwise done so.

Terry Gjersvik said Hinnenkamp was his former boss at the Area Learning Center. He described her as a “master negotiator” with these students, who knew how to get them to a diploma and had the respect of both the students and staff.

Hinnenkamp said education has been her whole life, and she supports the bills being supported by the Democrats in the House presently, including increased investments from the state in preschool education, K-12 education and special education funding.

“It’s been teachers doing more with less,” she said.

She supports a proposal in the House to give graduates free community college for a year, which she said would not only help the students, but the community as well.

She said she also supports working family issues and cares about the environment.

She noted while some may think she and her opponent Republican Rep. Peggy Bennett have a lot in common — they are both retired women teachers who were Teachers of the Year — they come from parties with many philosophical differences.

Hinnenkamp said she would promote being kind and taking care of people if elected.

Stiehm, who served as mayor in Austin for 14 years and who spent 30 years in law enforcement, said he decided to run for office because he was upset with the direction the country’s democracy is headed.

“My family has bled and died for our country,” he said. “I know what a patriot looks like. The only patriots I saw Jan. 6 were the ones wearing blue.”

He said he led Austin through some turbulent times and helped the city not only survive but thrive.

“We did so by giving a voice to everyone — whether I agreed with them or not,” he said.

He talked about the importance of including all people in the process, and said people deserve to be represented by someone without hidden agendas.

“Our government is designed to work best by compromise,” he said. “I get upset when I hear politicians say they can only govern if their party is in a majority. I will be an effective leader no matter which party is in control.”

Stiehm, who described himself as a centrist candidate, said people should not listen to politicians based off of what they say they can do but instead focus on what they have done.

The DFL 1st District congressional convention will be May 14 at Albert Lea High School.