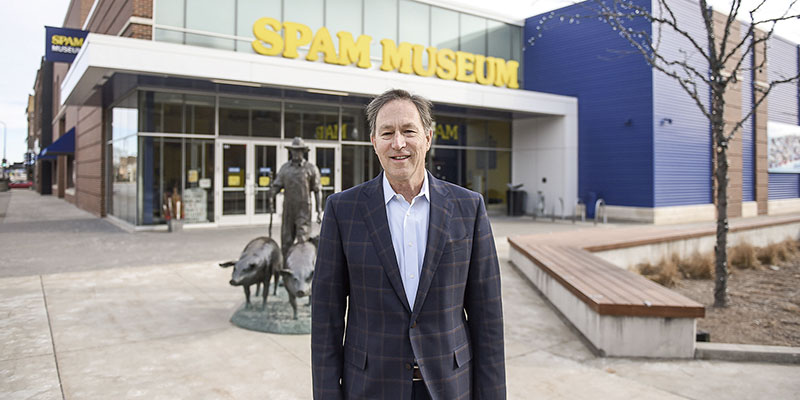 Jeffrey Ettinger, who served as Hormel Foods Corps. CEO for 11 years, announced today his intention of running for the 1st District congressional seat left vacant by the passing after a lengthy battle with cancer of Rep. Jim Hagedorn in February at the age of 59.

Ettinger is signing the necessary documents today, making his run official. Running as a moderate Democrat, he joins a field of 11 other candidates.

“[I’m] excited to have the opportunity to potentially serve the community in a different way if they choose to elect me,” Ettinger said Thursday morning from his office at The Hormel Foundation, where he serves as board chair. “I really, like a lot of folks, kind of look at our world and our country and see really significant challenges out there. I think most folks, unfortunately, view our political leaders as part of the problem rather than they do as part of the solution.”

Ettinger served as Hormel CEO from 2005 to 2016 and oversaw one of the most successful years of the company’s history including increases in sales, earnings, shareholder value and the number of jobs.

He is also the co-chairman of Gov. Tim Walz’s Minnesota Council on Economic Expansion.

While lacking experience on the political scene, Ettinger said he hopes his approach to business leadership can translate over to the halls of Congress. 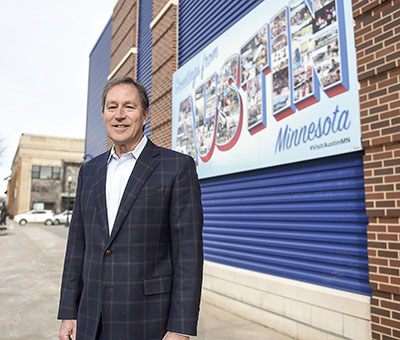 Jeffrey Ettinger is hoping to be a moderate voice in Congress if elected and will fall back on his successful years in business to help find lasting solutions. Eric Johnson/photodesk@austindailyherald.com

“Our team at Hormel Foods was able to successfully grow the company and through collaboration with many communities, create some good jobs and really add to the personal financial well being of a lot of folks,” Ettinger said. “My style of business was to try and be respectful and collaborative and really seek a lot of opinions and that would be my philosophy in running here as well.”

HIs involvement with The Hormel Foundation has only deepened that community connection, Ettinger said, as he hopes to spread that positivity across the southern part of the state and the 1st District.

By running as a moderate, Ettinger hopes to find solutions on both sides of the aisle.

“I would really be seeking to look for balanced solutions,” Ettinger said. “I think that’s where the correct solutions to problems lie. I think solutions that come from the middle stick, and are accepted by people more.”

“I think our district is moderate if you just kind of look at the history; it’s gone back and forth between Democrat and Republican representation,” Ettinger continued. “My opinion is that whoever represents the district should really make a strong effort to represent the whole district and not have it be kind of a winner take all. ‘My party won so I’m going to vote 99% with my party.’ That’s kind of what we saw the last couple years.”

In fact, Ettinger stresses that the political institutions could benefit from political leadership in some respects.

“One thing I think government could use and maybe borrow a little bit from business is a results orientation,” he explained. “You have all of these programs and all of these things you are trying to accomplish, but do you ever really kind of go back and make sure it’s actually working or is it something you’re studying ahead of time? You keep reading stories in Congress about huge bills being passed that members don’t have time to read.”

Ettinger said he understands this election will be unique and could see him on the ballot three times in one year, including a special primary election in May followed by the election in August to finish out the rest of Hagedorn’s term. Both of these would then be followed in November by the regular election.

However, in the short term Ettinger will focus on the special election, which would leave him little time to craft policy and bills if elected.

“Realistically, in that short amount of time frame I would be getting to know the place, getting to know the other members, acclimating myself to the issues and having a chance to spread out in the district and meet more folks, and obviously I would still be running,” Ettinger said. “A combination of serving and running. Having that head start, I think, would be nice.”

To that end, Ettinger is planning on getting out and conducting listening sessions across southern Minnesota and the broader district to hear from constituents as to what they think is important.

Ettinger has also looked at positions he holds on several boards, including The Hormel Foundation. Those holding public office are discouraged from serving on for-profit boards, which would apply to The Toro Company and Ecolab boards.

However, the Hormel Foundation board is nonprofit.

“My hope and goal would be to stay involved with The Hormel Foundation,” Ettinger said. “I think it’s such a great community asset and here I would be serving in the same broader community, so I don’t see a conflict there.”

Among his other pursuits, Ettinger also serves on the board of Better Futures Minnesota and teaches at the Carlson School of Business at the University of Minnesota.