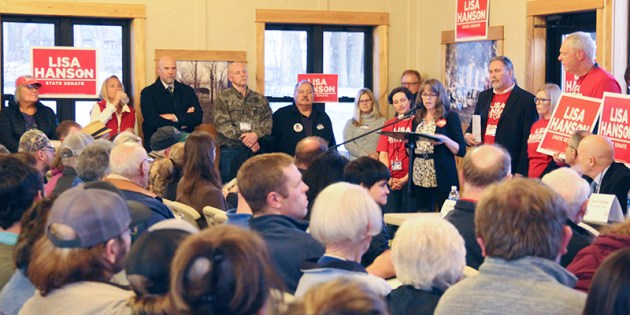 District 23 Senate candidate Lisa Hanson speaks about why she decided to run for office and her journey since deciding to open her former restaurant in defiance of government mandates in December 2020. Sarah Stultz/Albert Lea Tribune 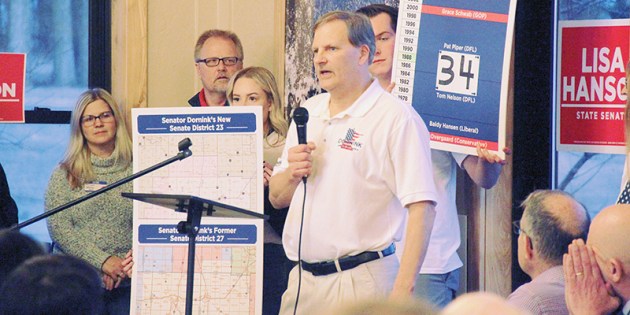 State Sen. Gene Dornink speaks during the endorsing convention Sunday night at Edgewater Pavilion in Albert Lea. Dornink is one of only two Republican senators to serve in the old District 27 in the last 50 years. The other was Grace Schwab for one term in 2000. Sarah Stultz/Albert Lea Tribune 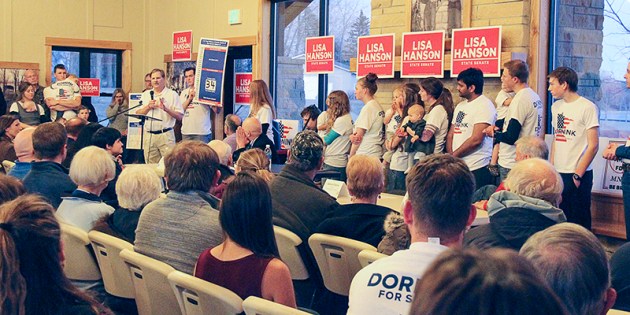 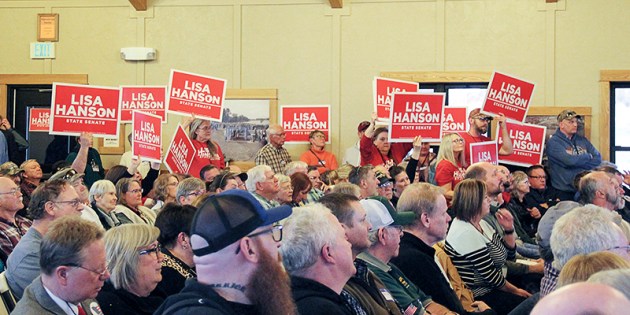 People in the audience hold up signs in support of Lisa Hanson for state Senate Sunday during the Republican endorsing convention. Sarah Stultz/Albert Lea Tribune

Dornink, who is in his first term in the Senate, announced in February after the state released new legislative boundaries that he would move from his home in Hayfield to a house he owns west of Glenville to be able to serve much of the same areas he represents now, including all of Freeborn County and most of Mower County. The new district no longer includes any of Dodge County, but includes parts of Waseca and Steele counties and further expands west into Faribault County.

Dornink sought the endorsement against former Interchange Wine & Coffee Bistro owner Lisa Hanson, who was jailed for opening her restaurant in defiance of state executive orders tied to COVID-19 in late December and early 2021.

Of the 217 delegate ballots cast in the endorsing convention, 149 — or 68.7% — were for Dornink and 68 — or 31.3% — were for Hanson. A candidate needed 131 votes — or more that 60% of ballots — to receive the party’s official backing. Delegates were from Freeborn, Faribault, Mower, Steele and Waseca counties.

“It’s humbling to receive the endorsement,” Dornink said in a speech after convention officials announced the results, pointing out how hardworking Hanson was.

He said he will listen to everyone in his role as senator, noting he tries to live his life by Jesus Christ’s message to treat others as you would want to be treated.

The real objective in the upcoming election, he said, is for Republicans to keep the Senate, win the House and help elect a Republican governor.

“We have to do that together,” Dornink said.

Freitag said Dornink stands by core conservative values with a goal to raise the standard of living for families, support the Second Amendment and support law and order, among other values.

Bennett said she met Dornink in 2015 when he brought his children to the Minnesota Capitol to learn about government. He took on incumbent and longtime state Sen. Dan Sparks first in 2016 and then ultimately won in 2020. She said she appreciated Dornink’s integrity, honesty and grit, among other characteristics.

Dornink said winning his seat in 2020 gave the Senate Republicans the number they needed to have the majority.

Thus far in office, he said he has worked to eliminate government authority to close schools and to ban vaccine passports and mandates, and has supported promoting election integrity and voter ID laws. He and the Republican-majority Senate have also stopped tax increases and extreme climate change mandate, he said.  He noted the Republicans have tried to pass 92 mandates on schools.

Hanson, of Hayward, referenced reopening her business in defiance of Gov. Tim Walz’s mandates on restaurants in the pandemic, accusing Walz of violating constitutional law and being protected by a “crooked legal system.” She faced both civil litigation and criminal charges tied to reopening, and was arrested after failing to appear for one of her hearings.

A jury ultimately found Hanson guilty of six misdemeanor counts of violating an emergency executive order and was sentenced to 90 days in jail, missing her 39th wedding anniversary, the birth of her granddaughter and spending Christmas with her family, she said.

Throughout her fight, Hanson has taken her message out across the state, and it has also spread throughout the nation.

“I am a fighter who puts the Constitution and the people first over any political ambitions and desires,” she said.

She said she tried to reach out to Dornink for help, but he turned her down.

“When we needed him the most, he wasn’t there for us,” Hanson said.

She said she knows how people felt watching their children be forced to wear face masks at school in the height of the pandemic and when the Minneapolis police precinct burned in the aftermath of George Floyd’s death.

She also brought attention to large omnibus bills that are voted on in the Legislature, saying she does not support them and referenced one bill that was 533 pages. She questioned whether Dornink had read all of the pages and said there was actually a line that gave funds to Planned Parenthood.

“This is business as usual in St. Paul,” Hanson said.

The Freeborn County GOP Party said in a press release Monday morning it was excited to endorse Dornink to continue his work.

“Gene has been a champion in the Senate for every person in our district,” the release said. “From union workers to farmers, to small business owners and more, Gene has been a proven fighter for this district, and we’re ready to help him win another four years in the Minnesota Senate.”

The release stated Bennett has been a consistent voice of reason in the Legislature, has always stood for common sense solutions that benefit her constituents and has always kept her campaign promise of putting people before politics.

The release stated Mueller ran in a difficult race against 16-year incumbent Jeanne Poppe in 2020 and won, in large part because of her “hard work, dedicated service and genuine love for her constituents.”