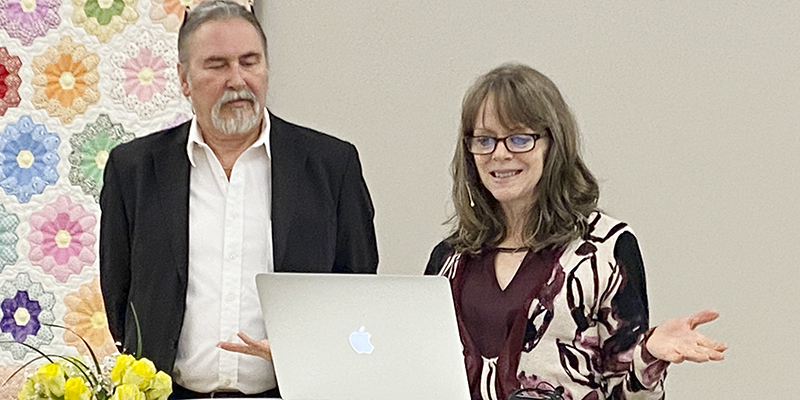 The former owner of The Interchange Wine & Coffee Bistro in Albert Lea, who was recently released from the Freeborn County jail for opening her restaurant in defiance of state executive orders tied to COVID-19, announced Thursday she is running for the newly formed state Senate District 23 seat.

Hanson, of rural Hayward, joins Republican District 27 Sen. Gene Dornink, of Hayfield, who this week announced he would also run for the seat, and plans to move from his present home to rural Glenville.

Hanson made the announcement about her run for office during a press conference at her family’s business, A-Best Sew and Vac in Albert Lea, with about 20 supporters.

“As your senator, I will boldy advocate to restore the rule of law and to return our government to the people, where it rightfully belongs,” she said.

Hanson has been a vocal voice against the state executive orders that shut down restaurants for in-person dining in late 2020 and early 2021 and has faced both criminal and civil court cases as a result of opening her restaurant for in-person dining at that time. She has argued that the matter is one of Constitutional rights and said she will continue to fight for those rights, not only for herself but for others across the state and nation.

She was convicted in December of six misdemeanor counts of violating an emergency executive order tied to opening her restaurant during the restrictions, and has a separate case with three criminal counts that is still outstanding. She has filed a motion to dismiss the charges.

“I stood against unconstitutional and fraudulent-issued executive orders dictated by our own Gov. Walz,” Hanson said. “I stand for the people as the relentless voice against lawless lockdowns and tyrannical abuse of power.

“This battle is not over. We have a great deal of work to do.”

She said to guarantee that what she described as “corruption and usurpation of power” never happens again, she announced she would take up the fight in the state Senate.

She said she spent many hours in prayer and in discussion with family and friends about the decision to run and had actually been thinking of doing so for over a year. However, it was when she was in jail, that she decided for sure to move ahead with the idea.

She had decided initially to run for the House District 27A, but when the new district boundaries were released this week, her residence and all of eastern Freeborn County will be in a House district with most of Mower County instead. She said she did not have any interest in challenging current District 27B Rep. Patricia Mueller in the new District 23B, so instead she decided to run for Senate District 23. Senate District 23 includes all of Freeborn County, most of Mower County and parts of Faribault, Waseca and Steele counties.

Hanson said she had not yet spoken with Dornink about her announcement to run for the seat, but said she planned to call him in the near future.

When asked if she would abide by the party’s endorsement for the seat, she said it was hard for her to answer at this point.

She said she supported the proposed Unilateral Emergency Powers Repeal Act, known as the Never Again Bill, which would transfer power to extend a peacetime emergency to the Legislature and make it so that executive orders issued by the governor will not be treated as laws.

She supports a person’s right to choose regarding medical freedom and said she supported constitutional carry, which gives people the legal right to carry a firearm without a permit or license.

She also described herself as “pro-life.”

“A life is a life, and so we must protect the unborn at all costs,” Hanson said.

To others in the Republican Party who may not have supported her in the past, she encouraged them to remember that if they want things to change, they have to do things differently.

“The state of Minnesota needs people like me that will make the sacrifice, that will even go to jail if I have to — to say enough is enough, no more, we are going to stand up for our liberties and freedoms, even if it means going to jail.”

She said she doesn’t want people to go through what she has experienced.

Hanson has been married to her husband, Vern, for 39 years, and has eight children and 10 grandchildren. She has been a businesswoman for 25 years.