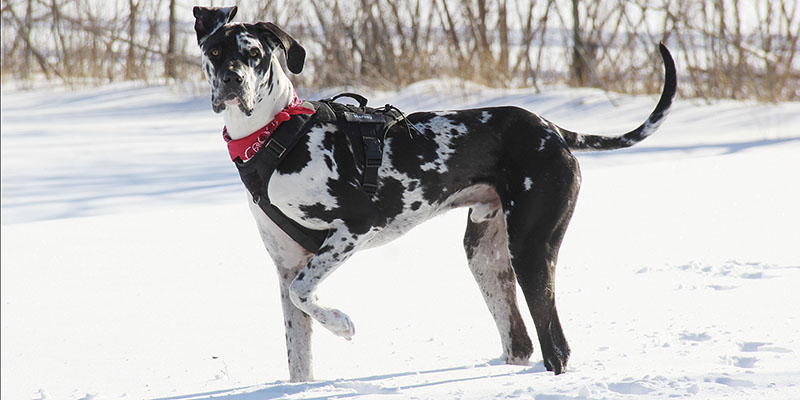 A Great Dane in Albert Lea, whose story exploded on social media last month after he was hit by a car, went missing and then was recovered, was at the center of a fundraiser Saturday to pay it forward to the Freeborn County Humane Society.

People from the community could come to the Edgewater Bay Pavilion and meet Harvey, who was born in July 2020 in Pipestone and picked up by owners Lisa Albright and Jeremy Waters, now divorced, in September that same year.

Albright said she had initially talked her former husband into getting Harvey. Though Harvey gets overly excited when they leave the house, he has always been pretty well behaved.

On Dec. 5, Albright said she and Harvey were in her car and had come back to her house on Fountain Street when she lifted the back end of the car for him to get out, and he saw someone across the street.

“He thinks he’s the greeter of Albert Lea,” Albright said, noting that Harvey loves to go to Home Depot, where dogs are allowed inside the store and employees often hand out treats.

But that day, when Harvey ran out into the road to greet the person across the street, he was struck by a car.

“He got hit, and I thought for sure he was going to be gone,” she said.

She ran after him, panicking and yelling, and Harvey stopped for a second and then he took off running.

They followed up on sightings from people in the community but did not have any success.

Albright and Waters said they know there were people who approached Harvey, but he was scared and did not stop.

The next day, Humane Society volunteer Gavin Cole helped track Harvey’s bloody footprints, and with the help of one of his friends, Justin Nelson, who brought his dog out to pick up the tracks where they lost them, they were able to find Harvey.

Albright, who was nearby in her car at the time, said Harvey went running past, and she got out of her car, called his name and he came right over and got into the back of the car.

He had worn off the pads on all four of his paws from all of the running, and aside from a few bumps and bruises, he had no broken bones.

“He just literally ran his pads off,” Waters said.

In the weeks since, Harvey’s paw pads have healed, and on Saturday he was running and playing outside in the freshly fallen snow and greeting visitors to the pavilion.

Albright and Waters said they are grateful for everyone who played a part in recovering their dog and wanted to thank everyone for their kindness by having a fundraiser for the Humane Society.

They said the posts about Harvey were shared hundreds of times, which they said were instrumental in helping them find the dog.

“I’ve been overwhelmed with it,” Waters said. “The response over a dog — our dog.”

Waters’ sister, Gina Grundmeier, who has a nonprofit organization called Pay It Forward in Mower County, helped organize the fundraiser and has started a fund called The Harvey Fund, in which people can donate to that will go directly to the Humane Society.

About halfway through the Saturday fundraiser, they had raised $655 for the Humane Society, including a check from the nonprofit.

Grundmeier said if anyone still wants to contribute, they can send donations to Pay It Forward at P.O. Box 442, Austin, MN 55912, and write “The Harvey Fund” in the memo line.

Christa Stieler, director of the Freeborn County Humane Society, said she was thankful the Humane Society could contribute to helping Harvey return home and said she thinks his unusual breed and the beautiful photos his family shared of him contributed to helping people want to spread the word about his story online.

“It was amazing to watch the community come together,” Stieler said. “Social media did amazing things for Harvey.”