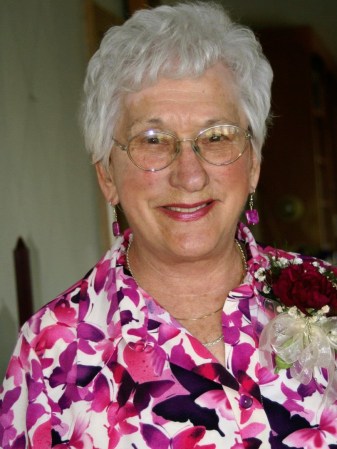 Our Mother died pretty much on her own terms, on December 8, at about 9am, in the living room of the home she loved, with her daughter Patti by her side.

Lillian Maria Schumacher was born on April 9, 1922, the fourth child of Edward George Schumacher and Louisa Maria Strobach in Windom Township in Mower County, Minnesota, and legend has it that she spent the first fragile month of life near a wood stove and thereby becoming the favorite (!) child. She would spend her entire life in Mower County.

Lillian began her education at St. John’s Lutheran School and graduated from Austin High School in 1939, where she worked in the cafeteria and attracted the eye of handsome Milton A. “Jack” Flynn. (Or she was introduced to him in Miss Edna Martini’s Mathematics class—history can be confusing.) They married in 1941.

Lillian and Jack built their own home on the southeast corner of Sutton Place and Deneen Street in Decker Acres and would fill that home with five talented and productive citizens: Patti, Tom, Jeff, Steve, and Erin. They loved that little house on the corner, and she never lived in another house for the entirety of her long life.

Mother was a rather good cook, kept a tidy house, trimmed a memorable Christmas tree every single year, managed to carry a higher-than-most bowling average, and wielded a mighty fine knitting needle, creating coats and jackets for anyone who asked and even teaching a dozen Brownie Scouts a craft that would be useful for their entire lives.

She and health were on good terms, except for an occasional bout with high blood pressure. Never needed more than one Anacin for any ailment. In 1997 Cancer came calling and Lillian made a small donation of a body part and they agreed to call it good.

She maintained amiable relationships with her children (actually raising five of them without raising her voice) and managed a 77 1/2 year marriage to her one and only sweetheart, who sang old love songs to her even after Alzheimer’s diminished parts of his brain but not his heart.

Born, baptized, and confirmed as a German Lutheran, she decided to join Jack and morph into a pillar in the 6th Pew on the Left at Christ Episcopal Church until the day she died. Her personal touch to the Annual Sauerkraut Supper will often be remembered, as will her legendary potato salad, delicious homemade soups, special Christmas cookies, and Sunday Coffee Hours celebrating a wedding Anniversary or family birthday. She considered The Church her personal extension to the small house they built on Sutton Place when her actual progeny outgrew Sutton Place. There are not words that can explain the oneness between the Flynns and Christ Church. They were faithful beyond human understanding. It was Sunday – they went to Church.

Rumor has it that Lillian was likely the originator of Random Acts of Kindness.

As technology took over the Earth, she made her cellphone her personal watch, constantly needing recharging.

She shared simple but memorable things like a film container full of quarters to spend on vacation or $100 slipped to a priest or random human deemed needing something to help them look on the sunny side.

She was tall, thin, had a stylish wardrobe, and was generally the prettiest woman in the room.

Being a natural friend-gatherer, she acquired many at Bridge Clubs (where she was a wonderfully clever bidder), hosted and attended coffee-hours at 4pm every weekday, and even dragged those girls and their families for a week Up North every summer for waterskiing, cardplaying, and trips to Longville for turtle races, ice cream, and even a few beers. When Jack retired in 1987, vacations turned South to spend winters in South Padre Island, Texas, to take up golf; she never managed a hole-in-one like Jack, but she became a better putter and was a daily golf partner—enjoying it even more when they acquired a golf cart. The world will always question the validity of any Grama Hands or Grama Cuts in Cribbage, but her grandchildren will know the truth.

Always a good sport, Lil accompanied Jack to create and maintain a Guinness Record of taking at least one toboggan ride down Skinner’s Hill well into the 21st Century. She was an Austin Packer fan her entire life and in love with her Twins and Vikings, even when she needed a volume of 35+ and her macular degeneration interfered with calling fouls and strikes.

Grandchildren who adored her:

The Grandchildren she called Great are:

Great Great Grandchildren to carry on her legacy are:

We will celebrate the gift of Lillian in our lives at 2pm on Tuesday, December 14, 2021, at Christ Episcopal Church, with viewing and visitation with her family at 1pm and Father John Sullivan officiating. A reception will follow in the church Fellowship Hall. Clasen-Jordan Mortuary is handling arrangements.

Lillian’s physical remains will spend Eternity with Jack at Fort Snelling and random places around the Earth in the hearts of her family and friends.

She loved us more.