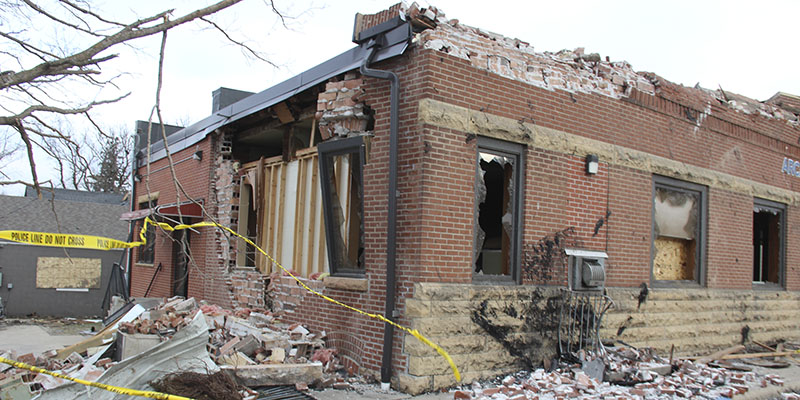 The National Weather Service confirmed Friday in a preliminary report a series of three tornadoes touched down in Freeborn County on Wednesday night with the most significant damage from an EF2 tornado in Hartland.

The other two tornadoes were confirmed as EF1 tornadoes in rural Alden, according to preliminary damage surveys.

The fast-moving Hartland tornado reached wind speeds as high as 115 mph and was 55 yards wide.

It started at 7:10 p.m. one mile south of Hartland and moved into town, damaging numerous buildings, trees and utility poles.

Additional tree and roof damage was observed to the northeast with some branches observed along Minnesota Highway 13.

The tornado dissipated to the northeast in a field, a total of 2.17 miles from where it started.

The first tornado in Alden started at 6:56 p.m. Wednesday about two miles east and northeast of Walters. It reached wind speeds as high as 105 mph and ended one mile southwest of Alden.

Surveys identified damage of a twisted road sign near the tornado’s origin. The path of tree and utility pole damage continued to the northeast.

The Weather Service did not identify this tornado’s width.

After the first rural Alden tornado dissipated, a new tornado started at 7:03 p.m. Wednesday about one mile east of Alden, damaging trees and a farm outbuilding.

It reached speeds as high as 100 mph and traveled 1.64 miles to the northeast, damaging additional trees before dissipating in a field.

The weather agency said that tornado was 40 yards wide.

The tornadoes are part of a historic night in Minnesota, as prior to Wednesday no tornado had ever been recorded in December in the state. The latest tornado on record prior had been on Nov. 16, 1931 near Maple Plain.

According to the National Weather Service, the storm was a serial derecho tracked from Kansas to Wisconsin that resulted in over 400 reports of damaging wind and several tornadoes.

According to Minnesota Public Radio News, the Weather Service has confirmed five tornadoes in Minnesota, with others in Wabasha and Winona counties.

At least five tornadoes have touched down in northeast Iowa and at least four in western Wisconsin.

Before the storms, strong southerly winds led to record high temperatures in much of the Upper Midwest. Temperatures exceeded 60 degrees across southern Minnesota, melting the remaining snow from the winter storm the weekend prior.

After the thunderstorms, strong gradient winds and widespread wind gusts in excess of 50 mph developed for several hours late Wednesday night and into the overnight hours.

Several barns and sheds in other areas throughout the county were also damaged, including Glenville, Conger, Hayward and Myrtle.

Freeborn County is asking residents with storm damage to report it through an online form on the main page of the Freeborn County website at www.co.freeborn.mn.us.

Completed forms will be processed by county staff and referred to the assessor’s office for review and action.