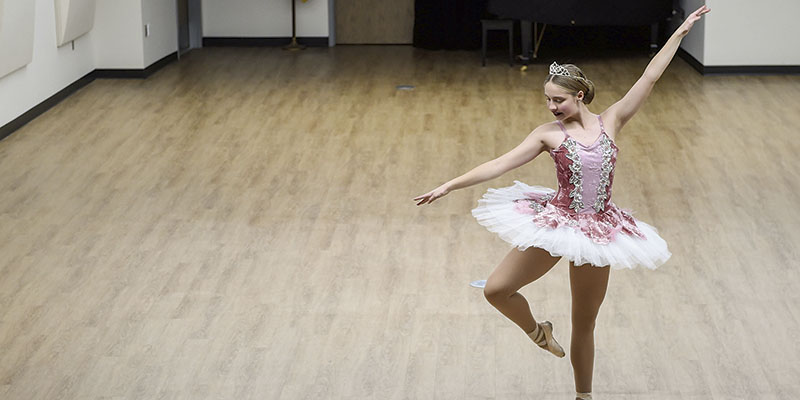 It was a busy day on the MacPhail Center for Music syllabus on Saturday, Nov. 20.

Students were going to be learning about four composers intricately woven into the fabric of Christmas tradition, brought to life and sound by their instructor Jacob Crosby.

This class, and others like it, are a bridge between two influential music organizations in Austin: MacPhail and the Austin Symphony Orchestra.

MacPhail Center for Music instructor Jacob Crosby leads people through a class of its Music for Life Series. Eric Johnson/photodesk@austindailyherald.com

The classes this year are part of the Music For Life series, which walks alongside ASO shows in an effort to connect the music and is geared toward those 55 and older.

It’s not surprising that MacPhail is working alongside the ASO. The ASO is the oldest symphony orchestra in the State of Minnesota at over 62 years old. Many of MacPhail’s instructors play on the ASO, including Crosby, who is the ASO’s principal violist.

It’s a collaboration that just made sense.

“It’s a very good collaboration,” Berglund said. “Almost all of our faculty perform with the ASO. In addition we have many of our students who get to perform at the same time as their teachers and be exposed to fantastic artists.”

On this particular Saturday, Crosby was introducing those in attendance to the lives of “The Nutrcracker” creator Pyotr Illyich Tchaikovsky, Irving Berlin, LeRoy Anderson and Johnny Marks. The three latter composers are known for the songs “White Christmas,” “Sleigh Ride” and “Rudolph the Red-Nosed Reindeer.”

Combine artists with the dancers from Acclaim Dance Studio and those attending the class were given a connection to the upcoming ASO concert on Dec. 12.

“In this particular class, called Unwrapping the Orchestra, we are detailing out the music that is going to be played at the Austin Symphony Orchestra concert,” Berglund said.

Not only did attendees learn about the composers, but they were given a demonstration by some of Acclaim’s dancers, who will be receiving a one-of-a-kind experience themselves.

Acclaim dancers will be performing with the ASO in the Dec. 12 show, occupying the stage with the symphony orchestra during the performance.

But they also have their own presentation of the “Nutcracker Suite” at 6 p.m. on Dec. 4, in Austin High School’s Knowlton Auditorium. Tickets will be sold at the door or can be purchased at Acclaim Dance.

“It’s amazing,” Berglund said. “It’s even more amazing to be able to collaborate with MacPhail and the ASO and then extend to another medium of dance. It’s fantastic.”

For more on the Austin Symphony Orchestra, visit: www.austinmnsymphony.org/.

For more on MacPhail, visit: www.macphail.org/

For more on Acclaim Studio of Dance, visit: http://acclaimdance.com/.