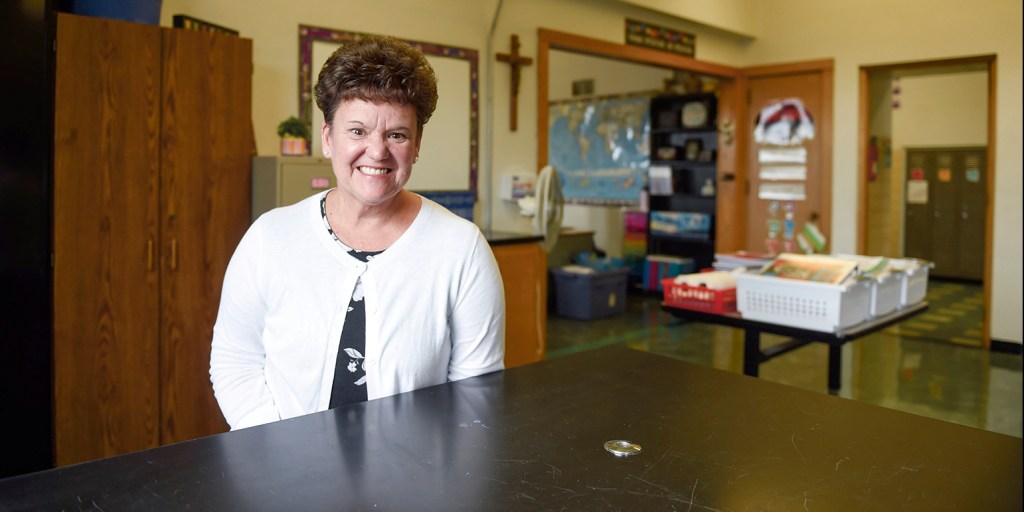 Marnie Leif taught fourth grade homeroom in September 2001 and faced a challenge on how to deliver such heavy news like 9/11 to her students.

On Sept. 11, 2001, teachers were among the millions watching the terrible events of the day unfold as airliners crashed, intentionally by terrorists, into the World Trade Center Towers.

Later that morning, another hijacked airliner crashed into the Pentagon and another into rural Pennsylvania when passengers tried to retake the plane.

The tragically unfolding real time events captured the attention of millions; however, in the immediate days, months and years afterward educators, had to grapple the subject matters entwined with the acts when instructing students.

It was never so easy as presenting the information. The events that led up to the attacks and in the years preceding them are an intricately tangled web of ideologies and beliefs.

Pacelli Catholic Schools fourth grade teacher Marnie Leif and Austin High School social studies teacher of government and economics Rayce Hardy both grappled with the situation of that day and how to go about teaching the subject matter as it unfolded in horrific fashion that September day.

These days, Leif teaches fourth, fifth and sixth grade science and social studies, but in 2001 she was entering another year of teaching fourth-graders.

As it did for many, the day began normally enough.

“I was teaching my kids and they had gone to phys ed,” Leif remembered. “They weren’t with me when I heard the first World Trade Center tower had been hit. Somebody had a TV on, but nobody knew what was going on. I had to pick up my kids from phys ed and had to figure out what we were going to do.”

The plan had to have a certain amount of finesse because there was the very real danger of creating fear among the younger students. Leif was particularly aware of this as she had three young children of her own at the time in her three daughters.

On top of that, there were several students who had parents working at Hormel Food Corporation and who traveled a lot. With so much unknown, the idea that a plane might simply crash could greatly affect the students and feed that fear.

“We continued with the day the best we could,” Leif said. “We have to do the best you can for the kids. You pretend everything was normal inside, all these thoughts go through your mind. Is this going to happen closer to home?”

While the students might have grappled with the weight of the subject, the adults — trying to understand what exactly happened  and how — could at least appreciate the gravity of the situation as events played out.

Leif said she just tried to keep the day as normal as possible, which was much easier given there was no technology in those days that left information readily available.

But after school, Leif said the adults finally had an opportunity to talk about the day. She said that the teachers left the heavy questions in the hands of parents, who could determine just how much their individual children should know.

Still, questions would ultimately come, so starting the day after, elementary teachers had to start actively taking part in guiding students through.

“In the morning, we initially talked about [what happened] and answered questions,” Leif said. “There was more prayer because as a private school we were able to do that. Let’s just pray for the victims, the workers, firefighters and police.”

“We had to be careful,” Leif continued. “You don’t want to cross a line as far as what the kids were learning at home.”

As more and more information came to light, teachers were finding ways to incorporate what had happened into daily course work. For Leif, it was teaching about those areas that had been directly affected.

“Typically, fourth graders learned regions of the United States, states and capitols, current events,” Leif said. “Scholastic Magazine would do a little bit of geography to show where places were in the news.”

In the year that followed, more and more came to light. On the day of the first anniversary, Leif and her new crop of fourth graders followed a similar routine to that first class.

“We would just talk about the anniversary,” Leif said. “The president would do a proclamation and I would find a copy of that. There was prayer and we would have a moment of silence.”

Leif said her students talked about the heroes on that day and related to what they could do as local heroes to support and help their own community.

Looking back to that day, Leif said she would have found it difficult to teach at a high school level. With the fourth graders, she was able to keep to more of a typical day with some deviations here and there.

“It would have been much harder to teach this at the high school,” Leif said. “They would have had more questions. It was easier.”

At the same time, the historical event was a defining moment for Leif. Suddenly the world seemed a lot smaller.

“It made you more aware,” she said. “It’s not always as safe as you thought it was. You question a little more than you did.”

Years later, Leif visited the WTC site. The profound trip that brought her to the heart of New York was a memorable experience.

“I remember going there for the first time in the middle of the city. I was just silence,” she said. “It was super respectival. People were just quiet.”

The challenge to teach 9/11 to younger students continues, not because of the heavy subject matter, but because of separation between the students of the moment. To these students, who weren’t alive during the events of 9/11, it is simply a moment in time.

But Leif still thinks about it and the lessons that came from it.

“Being in education you automatically think about it more,” she said. “I always thinking when I teach kids about service and that I personally should be knowing more. Just volunteer and help out.”

Rayce Hardy is currently a government/economics teacher at Austin High School, but in 2001 he was in the University of Minnesota graduate teaching program as well as instructing at Macalester College in the Twin Cities. Photos by Eric Johnson/photodesk@austindailyherald.com

In a lot of ways, Hardy was on the opposite end of the spectrum from Leif. Hardy himself was a student teacher at the time.

He was in graduate school and was teaching part-time at Macalester College. He was also working with student teachers at the University of Minnesota, going out to metro schools and observing them in their classroom positions.

However, on the morning of 9/11, he was doing something very different; working for a real estate company.

What was first believed to be an accident soon turned out to be much, much worse when the second plane struck the second tower.

“We turned and looked at each other,” Hardy said. “We both thought, there’s no way this is an accident. And then the gravity of the situation was pretty heavy.”

As the day continued to track, Hardy admitted it was hard to concentrate on his to-do list. In very quick fashion he contacted his boss in the social studies department for teacher training, Prof. Patricia Avery.

Student teachers were suddenly thrust into a situation of teaching the subject. It was going to present a different kind of challenge these students were maybe not prepared for.

But as it turned out, Avery was already in the planning stages.

“She’s a brilliant person and she had dozens for ideas already,” Hardy said. “That evening, we still didn’t know everything, but she already had ideas ready.”

To make things more challenging, school had just started at both Macalester and the University of Minnesota. And yet, it immediately changed how things would proceed going forward, much like another major news event that shook the nation in 1999.

“I had only been with the U of M for a few weeks when Columbine happened,” Hardy said. “That immediately changed what we had been doing with our student-teachers that were out and about. How are you going to handle this in your social studies classes. Talk about ready-made topics.”

The event clearly wasn’t going away and it would have to be taught. It reached into a number of different educational areas: Education would have to respond and respond quickly.

However, those who were in charge of instructing student teachers knew there would be a fall out of some kind. There was tremendous pressure being placed on the student teachers. Not only did this pressure come from the act of forging immediate lesson plans for them, but they also had to struggle with the event on a personal level.

Hardy remembered students who dropped out of the study, including a tech partner of Hardy’s, who had a friend who died in one of the towers.

“They just couldn’t handle the stress of it,” Hardy remembered. “Everybody deals with catastrophe in a different way.”

Another student simply got up during a class a couple nights after and left, quitting the program that night.

“We tried to think of things together to try not to overwhelm,” Hardy said.

But at the same time, Hardy saw the effects on others in a different way. Two of the students in the University of Minnesota teaching program were of Iranian and Egyptian descent. Both were citizens of their countries, studying abroad, but in a day Hardy saw both of their lives changed as well.

Hardy said that neither accepted the evil of the day or the harassment that followed.

“They defended themselves that day, but they changed how they lived,” Hardy said. “They changed their nightlife. They had to. The general public tied the two together by the end of the day on 9/11.”

Throughout the years that followed, Hardy has continued teaching the subject, but like Leif, the disconnect is becoming more and more. This year marks the first time not one student at AHS was alive when the attacks took place.

Two lessons became clear for Hardy on 9/11 and he brings them forward today. One is how a group of people can be lumped into a single category by one defining event, something Hardy calls “fallacy of composition.”

“That, to me in my life, that event is the one that caused the most damage,” Hardy said.

But Hardy also saw in the aftermath a rise in togetherness.

“When people came together,” Hardy said. “The other side is the number of people that just stopped their own interests to help people. That’s incredible.”

An event like 9/11 alters a world and changes a country in a way that is both sad and profound. Hardy recognizes that today like he did when he visited the site himself in 2010.

He wonders if things like this will ever change.

“I went down to the site in 2010, nine years after,” Hardy said. “It’s just weird. Some places have a feeling that it wasn’t one. There was still a feeling like, is this ever going to be done? That feeling to me is, no.”