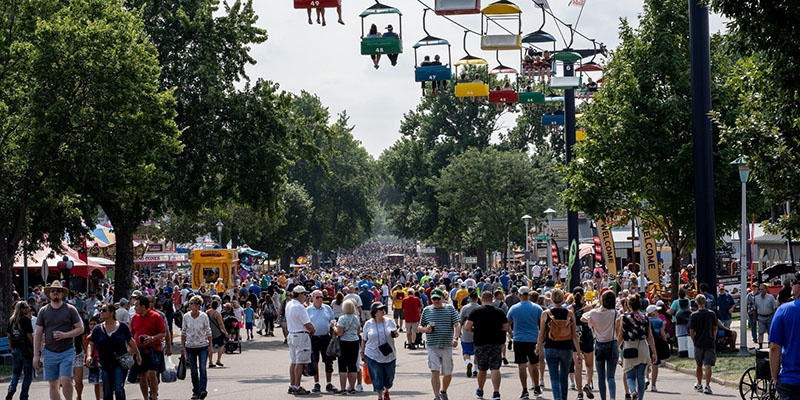 As the number of COVID-19 cases grows and throws curves at large event plans, masks at the Minnesota State Fair are likely to be more common than believed even a few weeks ago.

With a scheduled open on Aug. 26, fair officials have not yet made decisions on restrictions or mask requirements, but there’s growing concern among health experts about gatherings of large groups of people, even outdoors.

General manager Jerry Hammer said fair officials are staying the course for now — although mask-wearing is in the mix.

He declined to offer more details, but said a formal announcement on COVID precautions is coming soon. He also said that they considered a vaccine mandate, but at this point think it will be impractical to institute at fair entry points.

But Hammer said the situation is changing rapidly, as well.

“Two weeks ago, we wouldn’t have been having this discussion,” he said.

COVID cases in Minnesota have increased 80 percent week over week, but that may be due in part to increased testing. Around 60 percent of the state’s population has at least one vaccine dose, according to an MPR News analysis.

“Prior to delta, we said that it was primarily indoor-related experiences. Well, that’s still true, but even outdoor ones now are challenging us,” said Michael Osterholm, head of the University of Minnesota’s Center for Infectious Disease Research and Policy, in a CNN interview.

The State Fair was canceled last year because of COVID.

The Grandstand acts are going forward, even as performers like Garth Brooks say they’re reassessing tour dates as infections pick up. Hammer said they’re already taking steps like vaccinating all technical and stage workers and isolating backstage and catering areas to assure performers it will be safe to play the fair.

Hammer said there’s still time for fairgoers to help make sure the experience is as close to normal as possible.

“If you are vaccinated, thanks very much. If not, please, please consider getting vaccinated before the fair.”

Marvin Repinski: Pain, even during the holidays