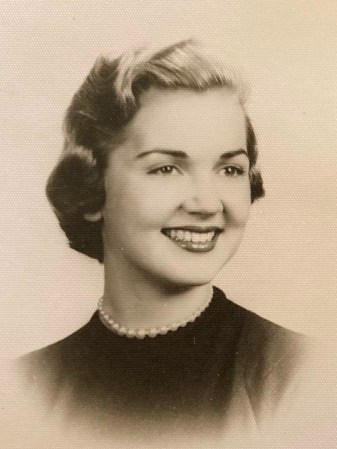 She was preceded in death by an infant son; parents, Neva Dufty Orcutt and George W. Orcutt; her husband of 55 years, Chandler “Harry” Stevens; and dear companion Jerry Gotler.

An accomplished actor, singer, and musician, Joann appeared as Cordelia in “King Lear” at UMN and was awarded the University Theater’s Outstanding Actress Award for her portrayal of Mary in “The Women”. She directed, produced, and/or appeared in countless theater productions throughout her lifetime, starring in almost every musical you can name. One of her favorite roles was Eliza Doolitle in Arlington Friends of the Drama’s 1964 production of “My Fair Lady”.

After teaching elementary and middle school Joann paused her career in the 60’s to raise her daughters. She returned to teaching in the 80’s and earned a Masters in Early Childhood Education. These years also saw many happy summers spent on Cape Cod in her beloved home-away-from-home, Falmouth, Mass.

She and Harry lived all over the country– Georgia, Massachusetts, Michigan, Minnesota, New York, Puerto Rico, Texas, and Virginia. They traveled extensively throughout their marriage, enjoying countless adventures across much of the United States as well as Canada, the Caribbean, England, France, Germany, Italy, Netherlands, Russia, Turkey, Ukraine, and Yugoslavia.

Upon returning to Austin in 1990 she worked as the Public Relations/Marketing Coordinator for St. Olaf Hospital (now the Mayo Clinic Health System) and served as a volunteer for the Austin High School Alumni Association. She also volunteered with the Austin Area Commission for the Arts where she helped spearhead restoration of the Paramount Theater. She and Harry were recognized for their service to the Austin area with a Jefferson Award for Public Service in 2007.

Her remarkable kindness, boundless creativity, adventurous spirit, quick-witted humor, and beautiful voice are missed by all who loved her.

A memorial service will be held at 2:00 PM on Saturday, August 7, 2021 at Clasen-Jordan Mortuary, Austin, Minn with the Reverend Marcia Pedersen officiating. Visitation will be for one hour before the service.

Donations in Joann’s memory may be made to The Michael J. Fox Foundation for Parkinson’s Research www.michaeljfox.org or The Paramount Theatre via Austin Area Arts https://www.austinareaarts.org.