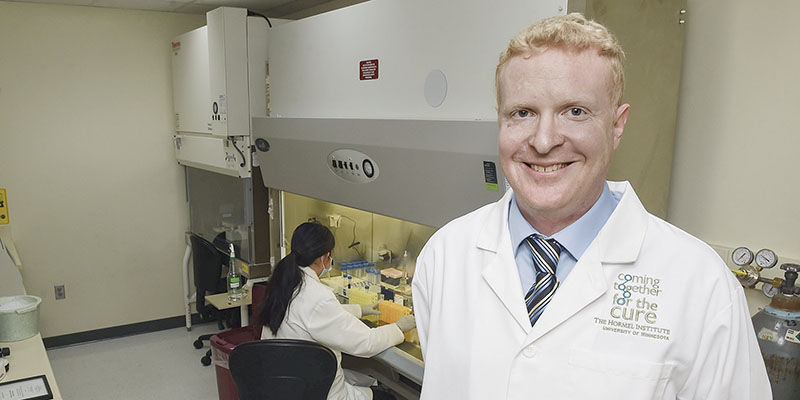 Dr. Luke Hoeppner is photographed in his lab at The Hormel Institute Tuesday morning. It was announced that Hoeppner was the recipient of a four-year grant worth $789,000 toward researching lung cancer from the American Cancer Society. Eric Johnson/photodesk@austindailyherald.com

Funding will aid in research of small cell lung cancer

The Hormel Institute (HI) announced that Dr. Luke Hoeppner, PhD, assistant professor and leader of the HI’s Cancer Biology research section, has been awarded an American Cancer Society (ACS) Research Scholar Grant of $789,000. The four-year grant, which is the most prestigious research award given by the ACS, will allow Hoeppner to conduct research into understanding and treating small cell lung cancer.

“This is a big deal,” ACS Executive Vice President Dave Benson said during a press conference on Tuesday at the HI. “The Research Scholar Grant is our biggest award. We’re excited to see what (Hoeppner) can learn through his research, specifically in lung cancer.”

Benson noted that applications for the Research Scholar Grant come from all over the country, primarily from universities. Grants are funded through private donors and corporate partners.

The ACS is the largest non-government, non-profit funder of cancer research in the United States.

Small cell lung is the most aggressive subtype of lung cancer, with only 7% of patients surviving over five years. Hoeppner’s team previously showed that several genes in the dopamine pathway promote drug resistance in lung cancer.

Being able to conduct the research is personal for Hoeppner.

“My uncle was diagnosed with advanced stage small cell lung cancer and very little could be done for him through existing therapies before he unfortunately passed away,” he said, noting that small cell lung cancer is typically treated with chemotherapy, but can become resistant to chemo after one year. “I am extremely thankful for this American Cancer Society funding because it allows me to pursue a new lung cancer research direction that otherwise would not be possible.”

“We are excited to see the progress Dr. Hoeppner and his team will make through this research, as together we partner to save more lives from lung cancer,” said ACS Director of Corporate Relations Keely Couillard. “We are grateful for our collaboration with The Hormel Institute, The Hormel Foundation and Hormel Corporation to help make this work possible.”

Lung cancer (both small cell and non-small cell) is the second most common cancer in both men and women, not counting skin cancer. The American Cancer Society estimates 235,760 new cases of lung cancer and 131,880 people will die from lung cancer this year.

“Cancer touches almost everyone, and that is very personal,” Hoeppner said.