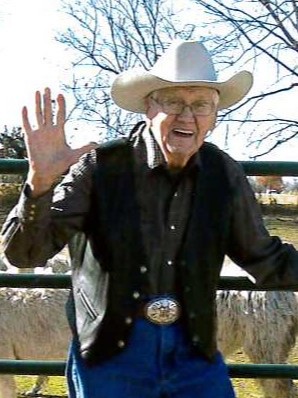 He graduated from Austin H.S. and married Lillian E. Bungum of Sargeant, MN. They were married 64 years before her passing in 2007. Elton was part of the greatest generation of WWII. He was drafted into the US Army. He was not deployed because of the Sole Survivor Policy and was honorably discharged. He returned home to farm the Graff farm with his father during the war while his brothers served in various branches of the US Armed Forces. He also owned and operated the Conoco and Shell station in Austin, MN. In 1965 he went on to travel the Midwest maintaining golf carts. He then moved to Illinois to work at Chrysler for 20 years.

When Elton retired, he and Lilliam bacame Missionaries to Mexico where they helped build a new school. In 2017 he helped establish an Alpaca ranch here in Clever, MO. Elton loved to tell stories and will be greatly missed by all his family and friends. He attended The Cowboy Church until the COVID 19 pandemic made it impossible to attend.

Funeral services are under the direction of Meadors Funeral Home, Republic, MO. There will be a Memorial Service for Elton in Austin, MN later this year.