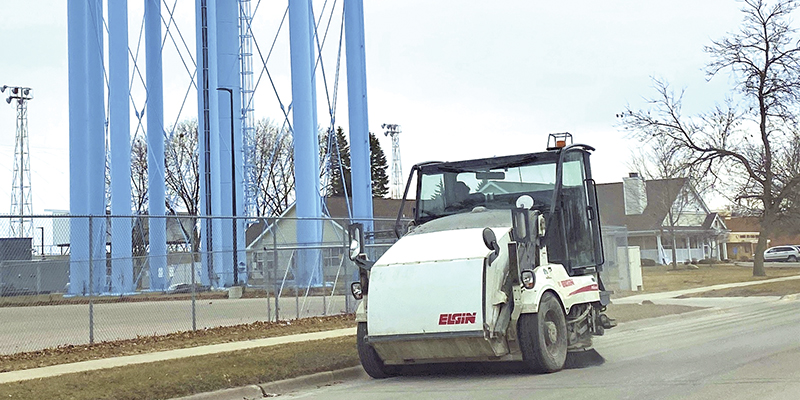 City street sweepers are driving Austin’s roadways for longer stretches of the day this spring under a new initiative to clear sand and salt in half the amount of time. 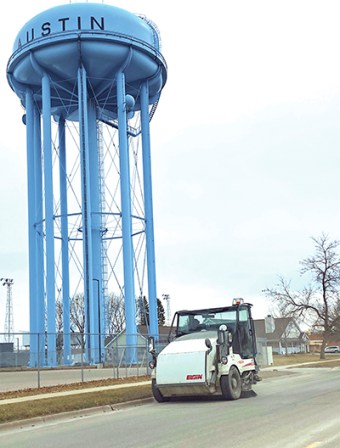 An Austin street sweeper goes past the water tower next to 14th Street NW. Photo provided

The City of Austin’s Public Works department is operating double shifts (4 a.m. to noon and noon to 8 p.m.) on weekdays with its two street sweepers and other crews as part of a three-week initiative to clean the sides of Austin’s 150 miles of roadways.

“This will help us clean the roads in about half the time it usually takes in spring after the snow and ice has melted away,” said Steven Lang, director of Austin’s Public Works.

Street sweeping helps prevent material, such as sand, salt and debris, from being washed into storm sewers that drain into local waterways, including the Cedar River State Water Trail.

Removing the sand and salt material keeps it from being swept into the stormwater system when it rains. This helps lower the amount of bacteria, chemicals, chloride from deicing salt and other pollutants from entering local waterways.

“The city does a great job of balancing public safety and protecting our water resources,” Hanson said. “We all appreciate the city’s commitment to keeping our streets safe during the winter but we’re also thankful for the timely cleanup of sand and salt in the spring.”

Only one teaspoon of salt can permanently pollute five gallons of water, according to the Minnesota Pollution Control Agency. Once in the water, there is no easy way to remove chloride. Data shows chloride levels continue to increase in surface and groundwater across the state.

Austin’s Public Works department also has an Adopt-A-Drain program it launched in 2019 to get citizens to “adopt” specific storm drains in the community to keep cleared of litter and debris. Volunteers pick a storm drain on a city map and fill out an Adopt-A-Drain application; then they are expected to routinely sweep their storm drain to keep it clear of leaves and other debris.

Adopt-A-Drain volunteers should keep track of the total debris collection from the drain to provide a report to the city. Those interested in adopting a city storm drain can view options on the city’s website at:  gis.ci.austin.mn.us/portal/apps/sites/#/city-of-austin-public-hub

Anyone interested in adopting a stretch of waterway or just being alerted when there are community cleanups should contact CRWD outreach coordinator Tim Ruzek at 507-434-2603, ext. 5, or tim@mowerdistrict.org.