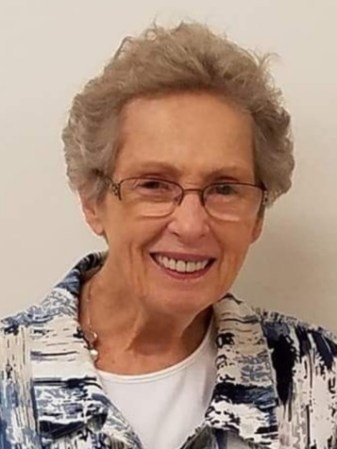 Susan Louise Wagner, 90 of Austin, Minnesota, passed away at home surrounded by her family on Thursday, February 11, 2021.

Sharon was born June 10, 1930 in Minneapolis, Minnesota to Donald and Margaret (Cowan) Knox. She graduated with the Class of 1948 from Austin High School. On September 12, 1949 she was united in marriage to Donald J. Wagner at St. Augustine Catholic Church in Austin. To this union were born two daughters, Anne and Deborah.

In 1952 Sharon went to work for Leonard Astrup of Astrup Drug in Austin. She enjoyed 42 years of service before retiring in 1994.

Sharon’s Catholic faith was very important to her. She was a devoted member of St. Augustine Catholic Church where she served as a Sacristan, Lector, Lay Eucharistic Minister, and Liturgy and Environment Committee member. She also enjoyed leading historical tours of St. Augustine, volunteering her time at the Philomathian Catholic Book Store, and serving a number of years as a member of the Winona Diocesan Board.

Sharon was a strong believer in community service. In the Austin community Sharon was a committed volunteer for Meals on Wheels for over 20 years, Austin Area Arts, Paramount Theater, and the Hospital Auxiliary. She served as Treasurer and Board Member at Oak Park Village, and was an active supporter and member of the YMCA.

She was preceded in death by her parents; husband Don of 65 years; infant brother; two great grandchildren.

Memorial Mass will be held at 11:00 a.m. on Friday, February 19th at St. Augustine Catholic Church in Austin with Father James Steffes officiating. Interment will follow at Calvary Cemetery. Visitation will be held on Thursday, February 18th from 4 to 7 p.m. at Clasen-Jordan Mortuary, and will continue Friday morning from 10:30 – 11:00 a.m. prior to Mass at church. Memorials are preferred to St. Augustine Catholic Church, or the charity of your choice.