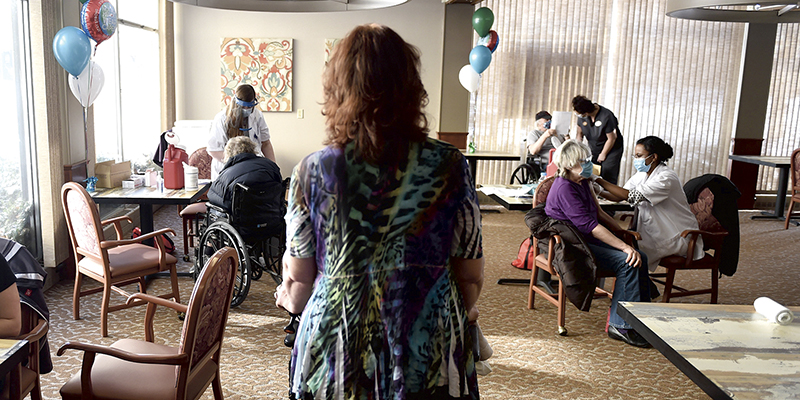 A member of the Cedars of Austin staff waits with a resident who was in line to get a COVID-19 shot in January. Herald file photo

MINNEAPOLIS (AP) — More than 35,000 doses of the coronavirus vaccine will be reserved this week for Minnesotans aged 65 and older after the state received a boost in supplies from the federal government, state health officials announced Monday.

The state will open permanent large-scale community vaccination sites in Minneapolis and Duluth this week for seniors, with the Minneapolis site also serving educators and child care workers. A third site in southern Minnesota will open next week, and additional sites may open in coming weeks or months.

The remaining doses will go to more than 100 hospitals, clinics and health care providers across the state so they can administer shots to seniors in their areas.

The state pivoted its two-week pilot of a community vaccination clinic program from a first-come, first-served model to a lottery system when clogged phones and a crashed registration website led to frustration among seniors trying to secure spots during the program’s first week. The state began the program at 10 sites across Minnesota after the federal government lowered the recommended age for vaccinations to 65 and up, and added educators and child care staff to the eligibility list.

The change in the state’s vaccination strategy also comes after an increase in weekly doses from the federal government from around 65,000 per week to around 79,000.

The original pilot sites are not scheduling any new appointments but will open again on Feb. 11 to administer scheduled second doses to individuals who received their first dose at those sites. More than 220,000 individuals who pre-registered for a dose at those sites last week will be selected for a spot at either the sites in Minneapolis and Duluth, or a future site.

In addition to the Minneapolis site, 35 local public health clinics across the state — as well as pharmacies in Brainerd, St. Cloud and Rochester — will administer doses to teachers, school staff and child care workers.

The Department of Health also unveiled a new vaccine locator map aimed at helping people connect with clinics, hospitals and other places statewide where they can set up appointments. The map is meant for seniors, but will later expand to serve everyone when more vaccine becomes widely available.

The virus has been ebbing for weeks in Minnesota, but health officials nationwide are concerned about emerging variants. On Monday, the state reported 727 new infections and two new deaths from the virus, bringing the state’s totals to 462,528 cases and 6,202 deaths since the start of the pandemic.