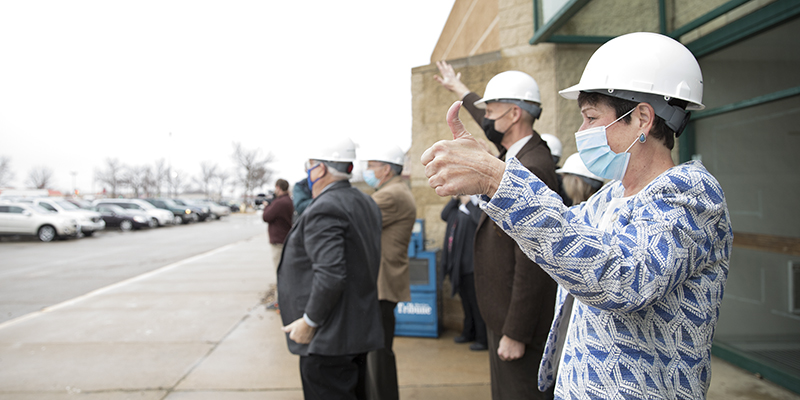 District 27A Rep. Peggy Bennett and Albert Lea Healthcare Coalition trustees and others involved with the new MercyOne Clinic acknowledge and celebrate with the audience in the parking lot. Because of COVID-19, the community was welcomed to participate and tune in to the ceremony from their cars Thursday. Photos by Hallie Cantu/Alebert Lea Tribune

About 3 1/2 years after a group of residents joined together to fight for health care options in Albert Lea, leaders of the Albert Lea Healthcare Coalition and MercyOne North Iowa Medical Center celebrated the groundbreaking of a new clinic Thursday in the former Herberger’s building at Northbridge Mall.

The first phase of the clinic is slated to open in July in 14,000 square feet of the building and will include primary care, specialists and mobile imaging. Future phases include an imaging center and ambulatory surgery center, and potentially other services dependent on patient needs and provider capability.

The grassroots effort to fight for health care in Albert Lea began in June 2017 after Mayo Clinic Health System in Albert Lea announced it would move inpatient surgery, childbirths, overnight hospital stays and intensive care to the Austin campus.

Residents began meeting weekly under a group called Save Our Hospital initially to convince Mayo to change its mind and restore services to the Albert Lea community. The group ultimately pivoted into Save Our Healthcare and then formed an official nonprofit called the Albert Lea Healthcare Coalition to fundraise and recruit a new provider to the city.

The coalition and MercyOne North Iowa Medical Center announced in September 2019 they would partner for a new clinic, and then in February 2020, the coalition purchased the former Herberger’s building to lease to MercyOne for the clinic.

Though construction was originally scheduled to begin last year, it was delayed due to the COVID-19 outbreak. MercyOne in November committed to a Jan. 1 restart date for the project.

Arends said the coalition has raised nearly $5 million, including donations from 500 citizens from Albert Lea and the surrounding area, 38 businesses, and four Albert Lea High School graduates from the 1950s who contributed almost $2 million themselves.

“It really is a testament of what can be done with a cause and a lot of supporters,” he said.

“I’ve never been more proud of Albert Lea and its citizens.”

The ceremony, which was moved indoors because of impending inclement weather, was limited in-person to trustees of the coalition, representatives from MercyOne, as well as architects, contractors and members of the media. Other community members listened from their cars in the parking lot as the event was broadcast live on KATE Radio, and periodically throughout the ceremony, people could be heard honking their horns to applaud the speakers and celebrate.

District 27A Rep. Peggy Bennett said she remembered attending the first meetings when the Save Our Hospital organization first started and talked about how even though it has been a long process, it was an “amazing” one.

“It’s exciting — it’s heartwarming to see how a community can come together when posed with a dilemma of losing the hospital services that we want here, that we’ve had here for well over 100 years. …” she said. “I think this is really an example that the state of Minnesota can have — and even throughout our nation — of what people can do when they really want to do it and when something’s important to them.”

She said last legislative session she introduced a bill to end the moratorium on new hospital beds in the state, and she planned to introduce that again this year.

Rod Schlader, president of MercyOne North Iowa, said the Albert Lea project was one of the most innovative projects he has been a part of and thanked the community of Albert Lea.

Teresa Mock, senior vice president of MercyOne Medical Group spoke of the process that took place in November 2019 to plan for the clinic and what has taken place in the months since.

“It’s very obvious that you’re passionate about health care just as much as we are,” she said.

Dr. David Heine, the first physician hired to work at the clinic, said as he was looking for an opportunity for the next phase of his medical practice, he was looking for a community like Albert Lea that had a commitment to wellness and community. He noted the community’s commitment to the Blue Zones Project and good health and said the ideals of wellness and community are also important to MercyOne.

“I’m really honored to be a part of this,” Heine said. “This is a really special thing for my family and I.”

Dr. Brittany Waletzko Bartz, the second physician hired to be at the new clinic, thanked all of the people who have welcomed her and Heine to the community. She said though they are not native to Albert Lea, they are enthusiastic to be here and are thrilled to start work on the new facility.

Arends also thanked the trustees of the coalition; consultant Colleen Spike of St. Peter, who helped guide them through the process; as well as other representatives from MercyOne; the architects and contractors.

“I think the citizens of Albert Lea are smiling today — and they should be,” Arends said.